U.S. not conducting air strikes in Syria 'at this time' - Pentagon 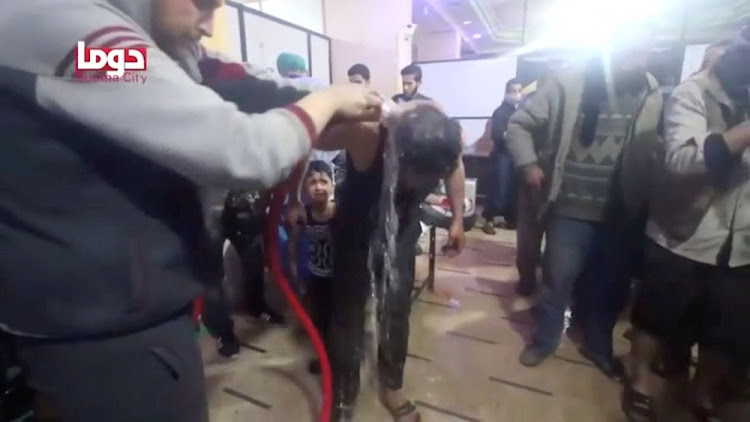 A man is washed following alleged chemical weapons attack, in what is said to be Douma, Syria in this still image from video obtained by Reuters on April 8, 2018.
Image: White Helmets/Reuters TV via REUTERS

The Pentagon said on Sunday it was not conducting air strikes in Syria "at this time," formally denying a Syrian state television report that the U.S. military had fired missiles at a Syrian government air base.

"At this time, the Department of Defense is not conducting air strikes in Syria," the Pentagon said in a statement.

"However, we continue to closely watch the situation and support the ongoing diplomatic efforts to hold those who use chemical weapons, in Syria and otherwise, accountable."

U.S. President Donald Trump warned on Sunday there would be a "big price to pay" after aid groups said dozens of people were killed by poison gas in a besieged rebel-held town in Syria, an attack the opposition blamed on Syrian government forces.

As international officials worked to try to confirm the chemical attack which happened late on Saturday in the town of Douma, Trump took the rare step of directly criticizing Russian President Vladimir Putin in connection with the incident.

With tension running high, Syrian state television later issued a report of a suspected U.S. missile strike on a Syrian air base, prompting a swift U.S. denial of any such attack.

Trump threatened action, although it was unclear what he had in mind. Last year, he authorized a cruise missile strike on a Syrian air base days after a sarin gas attack on civilians.

"Many dead, including women and children, in mindless CHEMICAL attack in Syria. Area of atrocity is in lockdown and encircled by Syrian Army, making it completely inaccessible to outside world. President Putin, Russia and Iran are responsible for backing Animal Assad. Big price to pay," Trump wrote on Twitter.

The Russian Foreign Ministry warned against military action on the basis of "invented and fabricated excuses."

The medical relief organization Syrian American Medical Society (SAMS) and the civil defense service, which operates in rebel-held areas, said in a joint statement 49 people died in the attack.

"Yesterday reports emerged of yet another chemical weapons attack by the Syrian regime," said the Syrian Negotiation Committee, a political opposition group.

U.S. government sources said Washington's assessment was that chemical weapons were used in a besieged rebel-held town in Syria, but they are still evaluating details.

The European Union also said evidence pointed to the use of chemical weapons by Assad's forces.

A European diplomat said Western allies would work on building a dossier based on photos, videos, witness testimony and satellite images of Syrian flights and helicopters. However gaining access to samples on the ground would be difficult.

The U.N. Security Council will meet twice on Monday following rival requests by Russia and the United States.

U.N. war crimes investigators had previously documented 33 chemical attacks in Syria, attributing 27 to the Assad government, which has repeatedly denied using the weapons.

Russia has repeatedly blocked efforts to hold Syria accountable both at the U.N. and OPCW.

In the early hours of Monday, Syrian state television reported loud explosions heard near the T-4 airfield in the city of Homs in what it said was a suspected U.S. missile strike. The report ignited a storm of messages on Twitter.

The Pentagon denied any such attack.

"At this time, the Department of Defense is not conducting air strikes in Syria," the Pentagon said in a statement.

"However, we continue to closely watch the situation and support the ongoing diplomatic efforts to hold those who use chemical weapons, in Syria and otherwise, accountable."

Last week, Trump said he wanted to bring home the 2,000 U.S. troops on the ground in Syria working to help fight Islamic State militants. His advisers have urged him to wait to ensure the militants are defeated and to prevent Assad's ally Iran from gaining a foothold.

Tom Bossert, Trump's homeland security and counterterrorism adviser, told ABC's "This Week" the White House would not rule out launching another missile attack and called photos of the incident "horrible."

One video of the new attack shared by activists showed bodies of about a dozen children, women and men, some with foam at the mouth. "Douma city, April 7 ... there is a strong smell here," a voice can be heard saying.

Reuters could not independently verify the reports.

Last year, one factor in Trump's decision to bomb Syria was televised images of dead children.

The presence of Russian forces at a number of Syrian military bases complicates the process of picking targets for any strike, said one official.

While some in the administration believe Russian forces should not be considered immune to attack because of Moscow's support for Assad, officials said Putin would see any loss of Russian lives or equipment as a deliberate escalation, and likely would respond by increasing support for Assad, or retaliating in other ways.

Trump had a previously scheduled meeting at the White House on Monday with senior military leaders. He has shaken up his core national security team, replacing national security adviser H.R. McMaster with John Bolton, a hard-charging former U.N. ambassador, who officially begins on Monday.

Bolton last year praised Trump's missile response, though he has generally focused more on Iran as a bigger security threat.

Top White House officials were uncertain what advice Bolton may have given Trump about Syria, said a U.S. official.

However, two officials said Trump has been adamant about withdrawing U.S. forces from Syria, despite warnings about the consequences from Defense Secretary Jim Mattis and other military officials.

The Ghouta offensive has been one of the deadliest in Syria's seven-year-long war, killing more than 1,600 civilians, according to the Syrian Observatory for Human Rights.

The monitoring group said it could not confirm whether chemical weapons had been used in the attack on Saturday.

Basel Termanini, the U.S.-based vice president of SAMS, told Reuters another 35 people, most of them women and children, had been killed at a nearby apartment building.

SAMS and the civil defense said medical centers had taken in more than 500 people suffering breathing difficulties, frothing from the mouth and smelling of chlorine.

Tawfik Chamaa, a Geneva-based Syrian doctor with the Syria-focused Union of Medical Care and Relief Organizations (UOSSM), a network of Syrian doctors, said 150 people were confirmed dead and the number was growing. "The majority were civilians, women and children trapped in underground shelters," he told Reuters.

Douma is in the eastern Ghouta region near Damascus. Assad has won back control of nearly all of eastern Ghouta from rebel groups in a Russian-backed military campaign that began in February, leaving just Douma in rebel hands.

Facing defeat, rebel groups elsewhere in eastern Ghouta have left. Until now, the prominent insurgent group Jaish al-Islam has rejected that option, but the attack led the group to finally give in to the government’s demand to leave.

Taking Douma would seal Assad's biggest victory since 2016, and underline his unassailable position in the war that has killed hundreds of thousands of people since it mushroomed from protests against his rule in 2011.