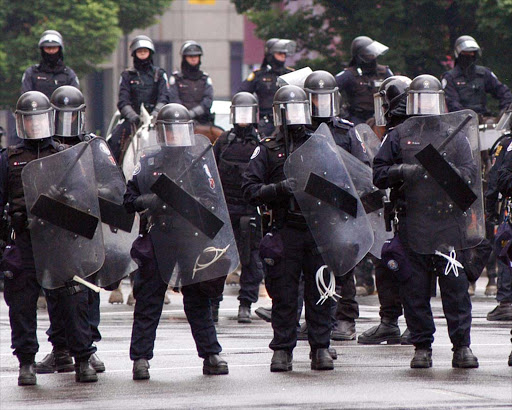 Riot police and armoured vehicles filled the otherwise empty streets of central Cairo early on Friday as security forces built up a heavy presence in anticipation of popular protests over deteriorating economic conditions.

A little-known group calling itself Movement of the Poor has called for Egyptians to protest on Nov. 11 against deepening austerity.

The calls had been made since August, but gained traction on social media last week after Egypt raised fuel prices and floated its currency - a move welcomed by bankers but bemoaned by ordinary people as the latest blow to their diminishing spending power in a country that relies on imports.

Tahrir Square was empty save for armoured vehicles equipped with tear gas canister launchers, dozens of riot policeman and high-ranking officers. Authorities shut down the Sadat metro station to prevent protesters from reaching the square famed for its political protests.

There was a similarly heavy security presence in other areas of Cairo, such as the Shubra district, and other major cities across the country including Alexandria, Suez, and Minya.

"Between you and me, this is good," said Shenouda Ishak, a driver in Shubra. "I don't think anything will happen but this security presence scares people and ensures nothing does."

It was unclear if protests would go ahead on Friday as they have won little support from prominent activist and opposition groups, though they have been backed by the outlawed Muslim Brotherhood.

But in a country where street politics helped unseat two presidents within two years, authorities are taking no chances. Dozens of people were detained in recent weeks for allegedly inciting unrest.

Protesters camped in Tahrir Square in an 18-day demonstration ended Hosni Mubarak's 30-year rule in 2011. When Egyptians took to the streets again in mid-2013 to end a year of Brotherhood rule, they looked to general-turned-president Abdel Fattah al-Sisi to restore stability.

However many ordinary Egyptians and activists believe the heyday of street politics is over. After taking power, Sisi quickly crushed dissent and has applied a protest law so strictly that few dare to come out, despite rising public anger.

In recent weeks, the president has urged Egyptians not to protest and warned that there would be no going back on economic reforms, no matter how much pain they might cause.

State media reported that police were surrounding the entrances of Cairo and other cities to ensure that members of the Brotherhood did not sneak in.

"Police have surrounded the entrances of Cairo, Giza, and Qalyubiya to prevent the terrorist group's elements from sneaking into any potential demonstrations heeding these call dubious calls and creating chaos," the state news agency said.

The interior ministry said on Thursday that it confiscated a cache of arms and ammunition hidden in a graveyard and house by the Brotherhood in Fayoum province, southwest of Cairo.

It also said it raided five bomb factories around the country on Wednesday, accusing a militant group of coordinating with the Brotherhood to attack police checkpoints on the eve of the protests.

Stung by street revolts that have made life worse rather than better, many people said they would stay home.

Reuters spoke to five activists who all said protests would achieve little and feared violence if they do materialise.

"The revolutionary bloc is reticent to protest. We now know that any street action leads to blood. There is no result we can achieve with this regime," said Malek Adly, a human rights lawyer with the Egyptian Centre for Economic and Social Rights.

Sisi came to power promising economic reform and stability but problems have piled up. With a budget deficit of 12 percent and a looming funding gap, Egypt reached a preliminary deal with the International Monetary Fund in August for a $12 billion loan to support its reforms.

The IMF board is set to meet on Friday to decide on approving the bailout programme. It will disburse an initial $2.75 million loan tranche on the same day if the package is approved.

Core inflation is almost at eight-year-highs, over 15 percent, as a foreign exchange shortage and a hike in customs duties bite hard in a country that imports everything from sugar to luxury cars.

Egypt raised electricity prices by 25-40 percent in August and introduced a 13 percent value-added tax approved by parliament in the same month.

The government has tried to win public support for the austerity measures with a billboard campaign and media blitz and also sought to expand social security schemes to shield the poorest from the effects of the rising prices.

But many Egyptians who would not qualify for such schemes complain they can no longer afford meat, while sugar shortages have driven fears of an impending food crisis.

In his speeches, Sisi has sought to persuade Egyptians that a collective sacrifice is necessary to save the country from financial ruin, even urging people to donate spare change, comments that drew online derision.

But he also warned that the army could be deployed within six hours in the event of street unrest.