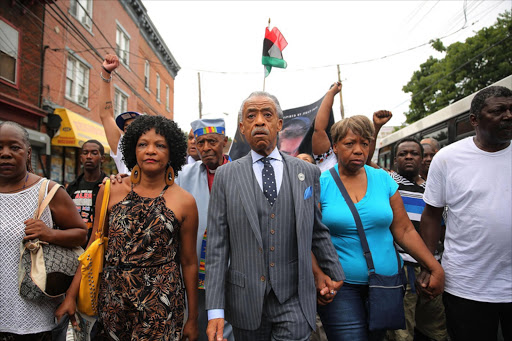 The Rev. Al Sharpton marches with family members of Eric Garner (right) and hundreds of others during a demonstration against the death of Eric Garner after he was taken into police custody in Staten Island on Thursday on July 19, 2014 in New York City. New York Mayor Bill de Blasio announced in a news conference yesterday that there will be a full investigation into the circumstances surrounding the death of Garner. The 400-pound, 6-foot-4 asthmatic, Garner (43) died after police put him in a chokehold outside of a convenience store for illegally selling cigarettes. AFP Photo

New York City has reached a settlement with the family of Eric Garner, who died after being put in a chokehold by police last July, agreeing to pay $5.9 million to resolve the claim over his death, city officials said on Monday.

Eric Garner's death, along with the fatal shooting of an unarmed 18-year-old black man in Ferguson, Missouri, last August by a white police officer, sparked protests around the country by people outraged over police treatment of African Americans.

"No sum of money can make this family whole, but hopefully the Garner family can find some peace and finality from today's settlement," Mayor Bill de Blasio said in a statement. "By reaching a resolution, family and other loved ones can move forward even though we know they will never forget this tragic incident."

New York City Comptroller Scott Stringer said on Monday the settlement with Garner's family was "in the best interest of all parties," adding that the city did not admit liability.

"I believe that we have reached an agreement that acknowledges the tragic nature of Mr. Garner's death while balancing my office's fiscal responsibility to the City," Stringer said in a statement.

Garner's family had filed a claim in October seeking $75 million in damages. Members of Garner's family, their attorney and the Reverend Al Sharpton plan to hold a news conference Tuesday on the settlement.

Jonathan Moore, an attorney representing Garner's family, said the settlement ends litigation against the city. A separate settlement was reached with the hospital that employed emergency medical technicians who responded to the scene and did not aid Garner, he said in an emailed statement. The terms of the hospital settlement have not been released.

"We will continue to press for a federal prosecution against the officers involved in the death of Mr. Garner," Moore said.

A grand jury declined to indict officer Daniel Pantaleo, who placed Garner in the chokehold, a maneuver banned by New York City police. Video of the incident taken by a bystander became public, stoking anger over Garner's death.

The settlement comes roughly a week after New York Governor Andrew Cuomo said he will appoint a special prosecutor to handle investigations when civilians are killed during confrontations with police.

Garner, a 43-year-old father of six, was accused of illegally selling cigarettes on a sidewalk when Pantaleo put him in the chokehold from behind and brought him to the ground with the help of other officers.

The video of Garner's arrest shows him arguing with officers before Pantaleo put him in the banned maneuver. With officers holding him down, Garner pleaded with them, saying repeatedly: "I can't breathe."

The city medical examiner ruled Garner's death a homicide, finding that officers compressed his neck and chest. Health problems, which included asthma and obesity, were contributing factors in his death, the medical examiner found.