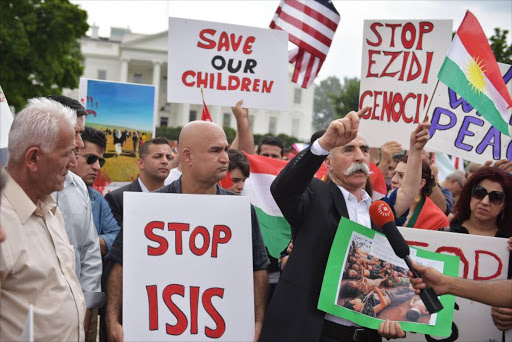 After fleeing from Islamic State militants, thousands of ethnic Yazidis stranded on a mountain were clinging to rumours that Iraqi government planes would drop food to save them.

The supplies never came. All they could do was pray for help.

Just a week ago, Yazidis living in their ancient homeland of Sinjar in northern Iraq felt protected by Kurdish peshmerga forces. Followers of an ancient religion derived from Zoroastrianism, the Yazidis are themselves Kurds.

The peshmerga - "those who confront death" - had acquired reputations as fierce warriors who once took on Saddam Hussein's troops. But they gave way before the Sunni militants, who had seized tanks and armoured personnel carriers from the Iraqi military when they swept through the north in June.

Iraq's U.S.-trained and funded army crumbled, leaving the Kurds and Shi'ite militias to fight back against Sunni militants, who were gaining momentum after launching a weekend offensive. The Islamic State said it has now captured Iraq's biggest dam, a military base and 15 towns.

The Yazidis appear to be paying the heaviest humanitarian price for the ambitions of the Islamic State, which has declared a caliphate in parts of Iraq and Syria and has threatened to march on Baghdad.

"Most of the families were stopped by Islamic State militants while they were leaving and the militants killed men. Some were beheaded," said Abu Ali, 38, who was hiding with tens of thousands of others on Sinjar Mountain.

"One of the saddest stories was one of our relatives. They beheaded all his 15 family members in front of him and then took him with them."

Yazidi women were hauled away for forced marriages, or perhaps slavery, as in other towns. "Some were taken to Syria," Abu Ali said.

Many of Yazidi villages were destroyed years earlier when Saddam Hussein's troops tried to crush the Kurds. Some were abducted by his security agents. Now they are on the defensive again.

Witnesses reached by telephone said about 100 babies died from thirst in mountains infested by snakes and scorpions. But coming down from the mountains and returning to Sinjar is a risky option.

In other places they have captured, Islamic State militants have imposed their radical view of Islam - women must wear a full-face veil, Shi'ite mosques must be dynamited, "infidels" eliminated.

Minorities have little chance of surviving unless they conform. Nareen Shammo, a Yazidi activist, said families who stayed behind in Sinjar were forced to convert to Islam.

"Five hundred women were kidnapped. Some of them were sold in an auction at low prices and others were forced to marry militants," Shammo said.

"Many members of minorities are even fleeing areas where there seems to be no imminent danger of an ISIS attack as they are so traumatised by their recent displacement," said Donatella Rovera, Amnesty International's senior crisis response adviser, who is currently in northern Iraq.

Some of the thousands of people trapped by Islamic State militants on Sinjar mountain have been rescued in the past 24 hours, a spokesman for the U.N. Office for the Coordination of Humanitarian Affairs said on Thursday.

"We're just receiving the information right now. We've just heard that people over the last 24 hours have been extracted and the U.N. is mobilising resources to ensure that these people are assisted on arrival," David Swanson said by phone from Iraq.

"This is a tragedy of immense proportions, impacting the lives of hundreds of thousands of people."

Another Yazidi, who asked not to be named, said he and his family spend their time under a tree to escape the punishing sun.

"We heard that there were planes which dropped some help, but we didn't get anything," he said.

Unable to return to Sinjar and fearful the rough mountain conditions could soon kill them, Yazidis were clinging to stories of heroics unrelated to realities on the ground.

"We heard that there is a person called Qasin Shasho who was in the mountainous areas, gathered his supporters and started to fight the Islamic State with the coordination of some young men. They forced the Islamic State to return back," said the Yazidi who asked to remain anonymous for fear of reprisals. (Additional reporting by Tom Miles in Geneva: writing by Michael Georgy; Editing by Larry King)