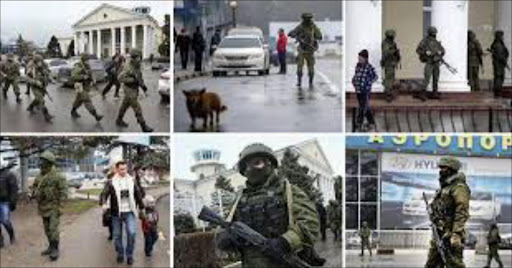 World leaders said yesterday that Russia’s invasion of Ukraine threatened to spiral into the biggest international crisis since the end of the Cold War.

On a dramatic day of escalation in what the US called an ‘incredible act of aggression’ by Moscow, there were warnings that the standoff threatens peace in Europe.

And today leaders of Europe and the U.S. called on Russia to act with 'self-restraint' and 'responsibility' and urged them to ease tensions in Crimea.

With little or no appetite to counter Putin’s aggression with military force, the West appeared to be struggling to agree on an effective response to the crisis.

Britain pulled out of preparatory talks for a summit of the G8 group of leading countries due to take  place in Russia in June, while the US suggested Moscow could be thrown out of the organisation altogether.

US Secretary of State John Kerry accused Putin of seeking to drag international relations back to the ‘19th century’, adding: ‘It is really a stunning, wilful choice by President Putin to invade another country. Russia is in violation of the sovereignty of Ukraine.’

Last night, Nato said Russia’s military action against Ukraine  was ‘a breach of international law’. ‘We call on Russia to de-escalate tensions,’ it said.

The crisis has been triggered by Russian forces effectively seizing control of the Ukrainian Black Sea peninsula of Crimea, which was a part of Russia until the 1950s.

Moscow is refusing to recognise the government which took power in Kiev last month after overthrowing the pro-Russian President, Viktor Yanukovych.

This weekend, the Russian parliament authorised Putin to deploy troops in Ukraine to protect the lives of Russian citizens.

Speaking as Western nations began suspending preparations for the G8 summit in June, Mr Kerry said Moscow could be forced out of the group altogether.

‘You just don’t in the 21st century behave in 19th-century fashion by invading another country on a completely trumped-up pretext,’ he said.

‘He [Putin] is not going to have a Sochi G8, he may not even remain in the G8 if this continues. He may find himself with asset freezes on Russian business, American business may pull back, there may be a further tumble of the rouble.’

The US yesterday warned Putin of massive economic reprisals which could include blacklisting oligarchs who parade their wealth abroad but keep tight links to Putin at home.

A diplomatic source said: ‘Tycoons like Roman Abramovich and Alisher Usmanov are more than football moguls – they are close to Putin. Whose side are they on here?’

Experts warned that an economic war between the EU, USA and Russia – with China likely to back the latter – would threaten globalisation itself.

US Senator Marco Rubio of Florida, a likely Republican presidential contender in 2016, declared Russia ‘an enemy of the United States’ and said that it would be ‘important to learn from the errors of the last few years’ in Mr Obama’s foreign policy.

Analysts agree that Putin saw Mr Obama’s failure to press ahead with military action against his ally, Syrian tyrant Bashar al Assad, despite declaring his use of chemical weapons a fundamental red line, as pivotal.

Foreign Secretary William Hague said the sovereignty and territorial integrity of Ukraine had been ‘violated’ and called for Moscow to speak directly to the nation’s new leaders.

Speaking from RAF Northolt as he left for crisis talks in Kiev, he said: ‘We have to recognise the sovereignty and the territorial integrity of Ukraine has been violated and this cannot be the way to conduct international affairs.

‘In addition to calling yesterday’s emergency meeting of the UN Security Council, the United Kingdom will join other G8 countries this week in suspending our co-operation under the G8, which Russia chairs this year.’

Last night Putin defended Russia’s action against ‘ultranationalist forces’ in Ukraine. Speaking on the phone with German chancellor Angela Merkel, he said the response by Russia so far was ‘wholly adequate’.

There was a glimmer of hope when Putin accepted a proposal by Mrs Merkel for a fact-finding mission and ‘contact group’ on Ukraine.

The Ukrainian ambassador to the UN, Yuriy Sergeyev, said his country was asking the West for help. ‘If aggravation is going in that way, when the Russian troops are enlarging their quantity with every coming hour, naturally we will ask for military support and other kind of support.’

Former Liberal Democrat leader and Special Forces veteran Lord Ashdown said: ‘We are one pace away from catastrophe at the moment – it would require one foolish act, a trigger-happy Russian  soldier, a Ukrainian guard who acts aggressively at one of these institutions taken over by Russian supporters, a foolish act now could tip us over the  edge.’ Former Foreign Secretary Sir  Malcolm Rifkind said the situation was ‘desperately serious’.

‘There is no doubt this is probably the most serious crisis since the end of the Cold War,’ he said.

‘Here we have in our own European backyard, military troops of Russia going across their international border into another country to try and interfere with its own internal affairs.

‘That is desperately serious, that has not happened for very many years, even at the height of the Bosnian conflict. This has to be a defining moment in the West’s relationship with Russia.