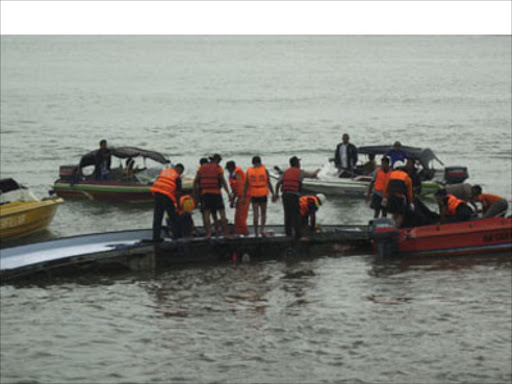 Locals on the tiny Italian island of Lampedusa fought back tears as they spoke of the desperate rush to haul dozens of drowning immigrants out of the sea as hundreds around them sank into the black waters.

"We were spending the night on our boat. We heard screams, and we rushed to see what was going on and found a nightmarish situation," Alessandro Marino, a shopkeeper on Lampedusa, told AFP.

Marino and his friend Sharanna Buonocorso were the first on the scene after a boat with up to 500 African asylum seekers caught fire and sank just a few hundred metres off shore in the worst recent refugee disaster in the Mediterranean.

"Many of them were crying. Lots were naked, to give themselves the best chance of staying afloat," said an exhausted-looking Buonocorso, gazing out over the port where rescuer workers had laid the first victims out in black body bags.

"Many helped pull others from the water, those who couldn't climb aboard by themselves because they had no strength left," she said, describing how the cries for help grew weaker as the minutes passed.

Around 150 survivors were rescued, and over 130 corpses found.

Those rescued said people on board had set fire to a blanket to attract the attention of coast guards after the boat began taking on water, and when the flames spread, panicked passengers rushed to one side of the vessel, flipping it over.

Dozens of people were trapped inside as it rolled over and sank and after a day's frantic search, officials said they doubted anyone else would be found alive.

The blue and white flashing lights of coast guard boats could be seen through the darkness as rescue workers continued to trawl the sea where the boat sank, and more divers were being flown in to begin a fresh search of the sunken vessel at dawn.

Local doctor Pietro Bartolo said he had been treating arriving immigrants on Lampedusa since 1991 and had helped survivors of many shipwrecks but had "never seen such a human tragedy on this scale".

"The hardest thing was seeing the bodies of the children. They had no chance. They came here in hope of a future which was snatched from them in a moment. It doesn't take long to succumb to the waves and the cold," he said.

Preparations were underway to receive hundreds of coffins being shipped in from the mainland and red cross workers moved back and forth from the port to the airport, where bodies were laid out in a temporary morgue.

Local fishermen and inhabitants of the remote island, where some 6,000 people live among the normally tranquil hills and white-sand shores, said they were used to desperate immigrants washing up on their shores but had never before felt so helpless.

"There was no time. We mobilised boats as soon as we heard what had happened, but for many, for most of the poor souls, it was too late," waitress Rossella Manuci said.

Survivors said they were from Eritrea and Somalia and had left from the Libyan port of Misrata. Many were believed to be heading beyond Italy's borders for other parts of Europe.

Islanders preparing a ceremony to pay homage to the dead on Friday said their biggest fear was that the good weather and calm seas would lead other desperate refugees attempt the perilous journey in the coming days.

"May god protect them," Manuci said.