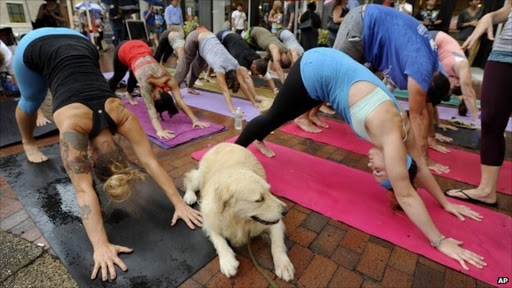 Sixteen Mexican boys stretch their bodies sideways with one hand to the ground, the other pointing to the ceiling, listening to their yoga instructor in the bare room of a youth detention center.

All dressed in navy blue sweatpants and white sleeveless shirts, the boys move in unison to Diaz's instructions, which he peppers with inspirational phrases as they breathe heavily, switching to poses like the downward dog, table and pigeon.

"Hands to the sky," says Diaz, his voice booming as he moves between blue and green mats in a room with barred windows. "Open your chest like a bird opening its wings and heading to freedom."

The soothing powers of yoga are among a slew of activities that the capital's juvenile halls offer to young offenders, hoping to steer them straight in a country struggling to defeat a wave of drug-related violence that has not spared Mexico's youth.

Within the high, barbed wire-topped walls of the Comprehensive Teenager Diagnostics Community (CDIA) in Mexico City, the 219 young detainees can learn carpentry, music or how to make tortillas in the cafeteria under the watch of unarmed guards in black uniforms.

Diaz's yoga class attracts teenagers like Jesus, 16, accused of rape, Pedro, 14, facing charges of killing a woman, and Eric, 19, who was sentenced to the maximum five years for a juvenile for the crimes of homicide, kidnapping and extortion.

"There are days when I wake up stressed out because I have a lot of time to serve, but when I come here all the stress goes away and I relax," says Eric, who was 17 when he decided to make "easy money" by helping to kidnap a man who was later killed.

Diaz learned yoga himself in prison after he was caught with a gun and 18 kilograms of cocaine in his luggage, which he was taking from the Pacific coast state of Guerrero to Mexico City in 2002.

After almost seven years behind bars, he decided to teach young offenders the physical and spiritual virtues of yoga that he learned from the Parinaama Foundation, which teaches the activity in penitentiaries.

"In prison, yoga was like a window for me, and as I practiced it more and more it became a door," said Diaz, who has the look of a rocker with tousled black hair and black bandana around his neck.

"I feel that I have a debt and that is why I come to these places, to share this. I have very little to feel good or proud about, and the little I have is this work that I do, which makes me feel good about myself," he says.

The prison director, Cynthia Rosas Rodriguez, may add massage classes to the program, which could give the boys another career option after they walk free, but she stressed that the focus was on education.

"We offer a series of activities that, taken together, are a good way for boys who lived through lots of violence to express and metabolize their emotions," Rosas said, acknowledging that the program will not change a "minority of boys."

Mexico created a juvenile justice system in a 2005 reform, which says teenagers should face jail only for serious crimes. President Enrique Pena Nieto, who took office in December, has launched a nationwide crime prevention program to keep youths away from gangs.

But Juan Martin Perez Garcia, director of the Mexico Children's Rights Network, said some of the reforms were only finalized last year and many states still imprison youths for less serious offenses when studies show that jails act like "crime universities."

The number of teenagers held in juvenile halls nationwide rose from 11,239 in 2011 to 11,684 last year, according national census figures. Some 12 percent were in their second stint in detention centers in 2011.

While Mexico City and the central state of Morelos are among the few that now rely less on incarceration, Perez said there was no scientific evidence that activities like yoga were effective.

"Things like yoga show a certain desperation, a search for something that can resolve or control the incarceration of these boys," he said.

Such debates seemed very distant at the end of Diaz's hour-long class as the 16 boys lay on the floor with their eyes closed, their teacher urging them to "let go of your problems, your sentence."

"From the first day I tried it I liked yoga a lot. It relaxes me when I'm stressed out," said Pedro, who says he was wrongly accused of killing a woman. "If I don't have the opportunity to study, I want to teach yoga."