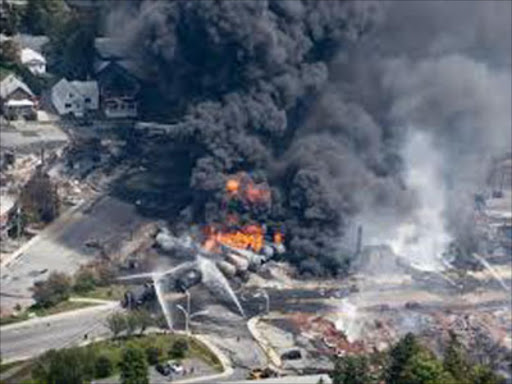 A Quebec town devastated when a runaway oil tanker train ignited explosions and fires braced Monday for what authorities assured would be a rising death toll as fire crews tried to reach the hardest hit areas more than two days after the disaster. Five were dead and about 40 people remained missing.

The growing number of trains transporting crude oil in Canada and the United States had raised concerns of a major derailment, and this one was sure to add to the debate over a proposed cross-U.S. oil pipeline that Canada says it badly needs.

All but one of the train's 73 tanker cars were carrying oil when they somehow came loose early Saturday morning, sped downhill nearly seven miles (11 kilometers) into the town near the Maine border, derailed and began exploding one by one. At least five blew.

Worries remained late Sunday over the status of two oil-filled train cars at the scene. They were being doused with water and foam to keep them from overheating.

"This is an unbelievable disaster," said Canadian Prime Minister Stephen Harper, who toured the town Sunday and compared it to a war zone. "This is an enormous area, 30 buildings just completely destroyed, for all intents and purposes incinerated. There isn't a family that is not affected by this."

The downtown bar area had been bustling at the time of the crash. Quebec provincial police Sg