Burundi, a nation divided over land 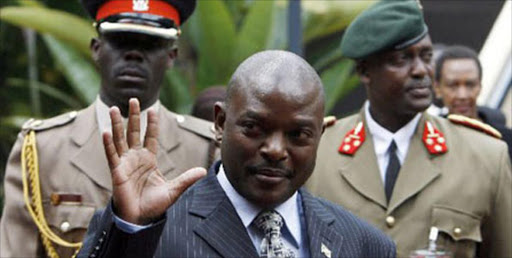 For the crowded and grossly impoverished country of Burundi, struggling to rebuild after decades of unrest and war, land is one of the most emotive issues of all.

Now as refugees return home to swell the already overpopulated central African country, the question of who owns property that changed hands during long years of war is raising tensions between the long time rival groups, the Hutu and the Tutsi.

Both have a case to make, but some see the government's National Commission for Land and Property (CNTB) as favouring one side over the other, said Pacifique Ninahazwe, a prominent civil society figure.

"The CNTB is increasingly deciding in favour of returnees and ethnic Hutu more generally, rather than recognising that both returnees and residents face problems," Ninahazwe told AFP.

"If this continues it will lead to other potentially devastating conflicts."

In one recent case in Burundi's capital Bujumbura, riots broke out as police tried to evict a Tutsi family from their house in order to give it back to a Hutu family, former residents 40 years ago.

"We are here to oppose injustice, to oppose the CNTB, which is undermining reconciliation in Burundi society," shouted a member of the thousand or so youths who gathered at the protest.

In that case, the standoff lasted six hours, left more than a dozen people hurt and resulted in the arrest of 20 youths.

The land commission used to favour splitting disputed land between the most recent owners and returning former proprietors who had lost their property in successive conflicts that drove hundreds of thousands to flee, from both ethnic groups.

However, the office of President Pierre Nkurunziza, a Hutu, took the commission under its wing at the end of 2010 and the head of state appointed a new CNTB president, Serapion Bambonanire, in April 2011.

Today, the commission increasingly decides in favour of returnees, rather than owners.

Bambonanire is unrepentant on this policy. Under his leadership, the commission has even gone back and revised previously settled cases.

"How can one justify someone having to share their land with someone who stole it from him?" he asked.

Land arguments have roots in the most bitter of ethnic rivalries.

In 1972, after several years of tensions that sometimes degenerated into killings, a Hutu rebellion erupted in Burundi.

The uprising resulted in the massacre of Tutsis, a group that currently makes up 14 percent of the population.

More refugees followed after renewed killings in 1988, and then a further wave of those fleeing a 1993-2006 civil war.

The peace process that followed resulted in the return of more than 500,000 refugees, most of whom have got their land back.

But tens of thousands of returning refugees from the wave that fled the country in 1972 have returned home to nothing.

"When the people who fled in 1972 came back, they found their property occupied by other people," said Samuel Nkengurukiyimana, who heads a civil society group backing the commission.

"The only solution is to return what was seized, otherwise we can't talk of reconciliation," he added.

In the 1970s, the then Tutsi leadership reassigned abandoned properties to both groups.

But today's Hutu-led government does not recognise the legitimacy of that earlier government, and the commission is accused of favouring Hutu returnees, creating tensions in the country.

The commission claims to have reached out-of-court settlements in some 23,000 cases.

Many complain the commission is ordering land back to its original owners without paying indemnities to the evicted owners of recent years, who often took over the land in good faith.

Yet the returnees are also growing impatient, and some have already staged protests to complain they are "tired of waiting for justice".

Nor is the problem limited to Bujumbura -- land disputes are found across Burundi.

In a nation where 90 percent of the population depends on subsistence agriculture, land is critical for survival. In some areas, population density is as high as 400 inhabitants per square kilometre.

That puts the commission in a tight corner, diplomats warn.

"The CNTB was tasked with sorting out the land problem while fostering reconciliation," said one Western diplomat. "The question today is: is it accomplishing that, given the ethnic tensions that are popping up again?"

Officially, Nkurunziza's government has congratulated the commission for its "remarkable work".

But the president's detractors accuse him of trying to exploit ethnic divisions in the run-up to elections in 2015.