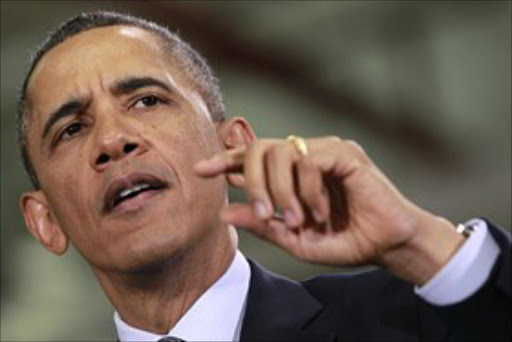 President Barack Obama urged North Korea to end its "belligerent approach," as US officials sought to play down a leaked intelligence report suggesting Pyongyang could place a nuclear warhead on a missile.

The dire assessment of the North's nuclear capabilities, revealed by a US lawmaker at a congressional hearing, came as tensions on the Korean peninsula mounted over an expected missile launch by Pyongyang in the coming days.

A senior official traveling with US Secretary of State John Kerry to Seoul, where he was due on Friday, again pressed China to encourage its wayward ally to stop its destabilizing nuclear activities and threats to the region.

The North's December rocket launch and February nuclear test, along with UN sanctions imposed for each, are at the core of the current crisis that has seen Pyongyang threaten nuclear strikes against the United States and its allies.

Speaking at the White House, Obama said "nobody wants to see a conflict" with the North, but emphasized that the United States was ready to take "all necessary steps to protect its people" and defend its allies in the region.

"We both agree that now is the time for North Korea to end the kind of belligerent approach that they've been taking," Obama said, appearing by the side of UN Secretary General Ban Ki-moon after talks in the Oval Office.

"It's important for North Korea, like every other country in the world, to observe basic rules and norms."

The top US official traveling with Kerry, who will also visit Beijing and Tokyo during his trip to Asia, said China had a key role to play in the crisis.

"China has a huge stake in stability, and the continued North Korean pursuit of a nuclear-armed missile capability is the enemy of stability," the official said.

In Washington, US congressman Doug Lamborn, reading from an unclassified portion of a classified Defense Intelligence Agency report, said Pyongyang could be capable of launching a nuclear warhead, albeit an unpredictable one.

"DIA assesses with moderate confidence the North currently has nuclear weapons capable of delivery by ballistic missiles," said the report, according to the Republican lawmaker. "However, the reliability will be low."

However, the Pentagon and an unnamed senior administration official were quick to throw cold water on the assessment.

Pentagon spokesman George Little said while he could not speak to the report in its entirety, he said "it would be inaccurate to suggest that the North Korean regime has fully tested, developed, or demonstrated the kinds of nuclear capabilities referenced" by the lawmaker.

Another senior US official told AFP: "The North Koreans have never demonstrated this capability and we don't believe they are able to now."

The intelligence report however marked the first time the US government had suggested North Korea may have succeeded in a years-long quest to miniaturize a nuclear device so that it could be placed on a missile.

Foreign spy services and arms experts have struggled to track North Korea's progress in this effort.

UN chief Ban earlier told CNN there was no independent confirmation of the DIA assessment.

Intelligence officials in Seoul say the North has two mid-range missiles ready for imminent launch from its east coast, and South Korea and Japan remained on heightened alert for any test.

"History has never seen any socialist leader like him," the official party mouthpiece Rodong Sinmun said in praise of Kim Jong-Un, calling him the "No. 1 man of conviction and will".

In apparent reference to its missiles, North Korea said its units were on standby for a launch.

Although Pyongyang has not announced any launch, many observers believe it will take place during the build-up to the April 15 birthday anniversary.

Yonhap news agency quoted military sources as saying the North was moving multiple missiles around in an apparent bid to confuse outside intelligence gatherers about its intentions.

The North last week told foreign diplomats in Pyongyang they had until April 10 to consider evacuation, and warned foreigners in South Korea to get out ahead of a possible "thermo-nuclear" war.

The European Union said the seven EU countries with embassies in North Korea saw no need to leave, adding it saw no risk to EU citizens in the South.

Despite the reassurances, there is still growing global concern that sky-high tensions might trigger an incident that could swiftly escalate.

The mid-range missiles mobilized by the North are reported to be untested Musudan models with an estimated range of up to 4,000 kilometers (2,485 miles).

That would cover any target in South Korea and Japan, and possibly even US military bases on the Pacific island of Guam.