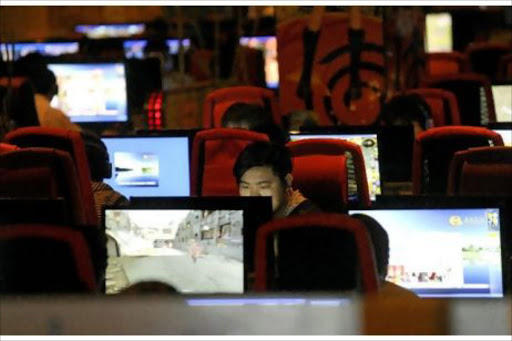 As a young man shouted and hit his computer table, interrupting the whirr from dozens of cooling fans at a large internet cafe in Beijing, few people moved their gaze away from their flashing screens.

The frustrated gamer, perhaps annoyed because his character had been shot in one of the hugely popular online battles, lit a cigarette to calm himself.

White light from the other terminals illuminated the tired faces of dozens more customers.

"I throw people out if they stay for more than 24 hours," Ding Dan, the owner-manager of the internet cafe, told dpa.

Ding said she monitored everyone's time online from a central terminal. But some of the customers, who were mostly students and migrant workers, refused to leave.

"The men, especially, don't want to go," she said. "They play all the time and forget their families at home."

China has an estimated 560 million internet users, including about 450 million under 18, according to a government report last month.

More than 60 per cent of them are regular online gamers, the China Internet Network Information Centre said last year.

Experts believe tens of millions of Chinese people are addicted to the internet, many of them teenagers, with online gaming and gambling among the biggest lures.

Youngsters often seek refuge online because they find it hard to cope with China's intensively competitive school system, said Pi Yijun, a government expert on the protection of minors at the China University of Political Science and Law.

"Those who find it hard to adapt want to alleviate the pressure from study," he said.

Despite a ban on under-18s visiting internet cafes, many schoolchildren escape the clutches of their families by visiting them instead of using home computers.

Smart-phones and tablet computers made it easier for children to access the internet even during school hours, Pi said, but "the main problem still lies in education itself."

State media have highlighted the problem of addiction in several dramatic reports in recent months.

Police arrested a 14-year-old boy who confessed to poisoning his family with agricultural chemicals after his parents stopped him from playing online games in the south-western city of Ziyang last year.

In December, a local newspaper reported that a man in the northern province of Shaanxi hired online "assassins" to kill his 23-year-old son's characters in popular games.

The father reportedly wanted to push his son, who had played online games since his mid-teens, to try harder to find a job by making him lose interest in the games.

Another report last month featured an unemployed college graduate who had lived at a internet cafe in the north-eastern city of Changchun for up to six years, leaving each day to buy food and sometimes to take showers.

"His case is quite serious, but it is common among addicts," said Ding Jianlue, a psychologist at Jilin University in Changchun who met the young man living in the internet cafe.

"He is a young man who cannot find a job after graduation, so he chose to escape," Ding said.

Many Chinese adults, as well as juveniles, are addicted to the internet, he said.

"Housewives use the internet to kill time, university students have plenty of free time and they are willing to accept new things and are very easily attracted by online games," Ding said.

"As for new graduates, they suffer huge pressure from society, so they prefer to release the stress and escape from their cruel reality via the internet," he said.

In February, the Ministry of Culture and the National Internet Information Office announced plans to develop a framework for diagnosing and treating internet addiction this year.

The plan will prioritise interventions in juveniles' addiction to online gaming and strengthen supervision of game producers and internet cafes, state media said.

A military hospital in Beijing agreed to stop using electric-shock therapy for internet addicts following a media outcry, while two camp instructors were jailed in 2010 after a 15-year-old was beaten to death in the southern region of Guangxi.

Pi and Ding both said the controversial military-style programmes were "very effective in the short-term," but most of those treated returned to the same addictive behaviour after their release.

The new government programme, expected to include family and group therapy, would be hampered by China's lack of psychiatrists and qualified counsellors, Ding said.