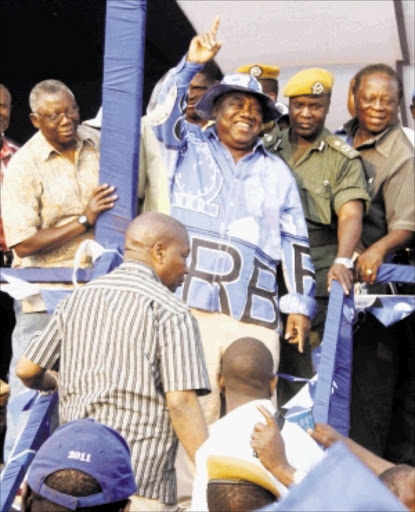 Choose ME! Zambian President Rupiah Banda at a rally in Lusaka's Mandevu constituency.

Zambia's ex-president Rupiah Banda is set to go on trial Wednesday charged with abusing his power over a Nigerian oil deal that he struck while in office.

Banda, who ruled Zambia from 2008 to 2011, when he lost to Michael Sata, last week pleaded not guilty to sealing the crude oil contract to benefit himself and his family.

The former head of state was arrested after lawmakers last month lifted his immunity from prosecution, which he is fighting in a separate court battle.

He faces a maximum of five years in prison if found guilty.

The prosecution is ready to go to trial, but it is believed that the defence could mount a challenge.

A trial will pit the defence's argument that Banda is a victim of a political ploy against the state's claims that he was involved in corrupt activities.

The case stems from the procurement of a crude oil contract on an unknown date during Banda's three years in power.

According to court papers, the 76-year-old is accused of procuring the inter-government contract for the country but which was "".

The state claims Banda roped his son Henry, who left Zambia after his father lost power and is wanted by authorities.

Banda is charged with instructing his son to "determine the destination of the funds which were proceeds" of the contract.

The prosecutors argue this resulted in Zambia having not received "any benefit" from the deal.

Banda's lawyer Sakwiba Sikota has said that the only defence that the former leader would rely on is the truth.

"We know this is a fishing expedition and the truth shall be known," he said when Banda was arrested.

Since Sata came to power he has rolled out an anti-corruption drive that some have seen as a move to silence dissenting views.

Some analysts have claimed that Sata's government was persecuting leaders in the previous government, a claim that chief government spokesman Kennedy Sakeni vehemently rejects.

Sakeni insists the government will adhere to the law and therefore not prosecute anybody without reason.

"We have the courts of law and if somebody is clean he will be cleared by the courts. We are a government that believes in the rule of law," Sakeni said.

The trial would not be the first time that Zambians see a former leader be put through the courts.

The late Frederick Chiluba, who ruled from 1991 to 2001, also had his immunity removed and faced graft related actions at home and in Britain.

He was eventually acquitted by a Zambian court and a local judge refused to recognise a guilty ruling handed down in London.