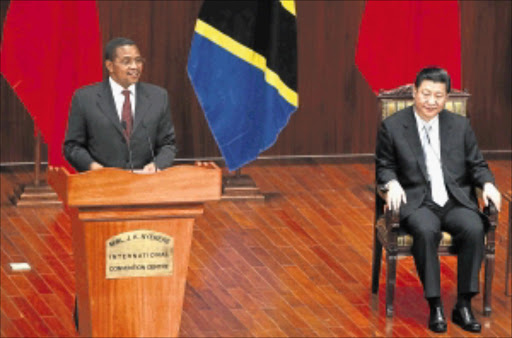 DAR ES SALAAM - Chinese President Xi Jinping is on a tour of Africa that underlines the continent's strategic importance to China for its resources and as a market, signing more than a dozen trade and co-operation deals with Tanzania.

Xi, who will also be visiting South Africa and the Republic of Congo, is on his first trip abroad as president following a visit to Russia. Xi is expected to build on expanding economic relations that many Africans see as a healthy counterbalance to the influence of the West.

He might also address concerns in Africa that the continent is exporting raw materials while spending heavily to import finished consumer goods from the Asian economic powerhouse.

"He will be looking to tone down the feeling that China is just here to exploit resources. I think that is going to be his main job," James Shikwati, director of the Nairobi-based Inter Regional Economic Network think tank, told Reuters.

The agreements with Tanzania included plans to co-develop a new port and industrial zone complex, a concessional loan for communications infrastructure and an interest-free loan to the Tanzanian government. No details were given on the size of the loans or the monetary value of the projects.

Xi was also expected to make his first policy speech on Africa yesterday.

He will then head to SA for a summit of leaders of major emerging economies, known as the BRICS (Brazil, Russia, India, China and South Africa), today and tomorrow.