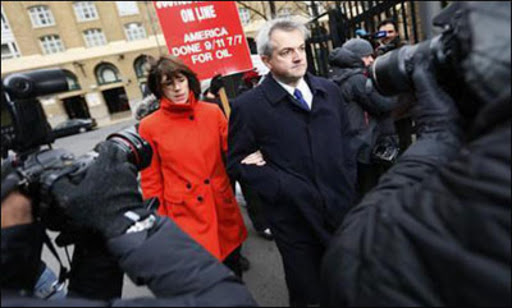 Disgraced energy minister Chris Huhne was jailed for eight months on Monday for lying to police about a speeding offence in 2003, in the final chapter of a bizarre tale of adultery and revenge that has gripped the British public.

Huhne's ex-wife Vicky Pryce, a prominent economist, was also jailed for eight months for her role in the deception.

Prior to the scandal, Huhne had been seen as a potential future leader of the Liberal Democrats, junior partners to the Conservatives in Britain's ruling coalition government.

When his car was caught by a speed camera, he and his wife falsely told police she had been driving, so that the minister could avoid a driving ban.

The incident remained a family secret for years but came back to haunt Huhne after he left Pryce for his mistress, Carina Trimingham, in 2010. Pryce told two newspapers about the 2003 deception in an act of revenge that landed both Huhne and herself in the dock.

"Any element of tragedy is entirely your own fault," judge Nigel Sweeney told the pair as he passed sentence on them.

"There is a controlling, manipulative and devious side to your nature," he told Pryce, saying she had been driven by "an implacable desire for revenge".

"Despite your high office, Mr Huhne, you tried to lie your way out of trouble by claiming you were innocent, by repeating that lie again and again," the judge told the disgraced politician.

"You have fallen from a great height."

The estranged pair sat side-by-side in the glass-walled dock during the lengthy sentencing hearing but did not make eye-contact. Trimingham sat in the public gallery in the courtroom packed with journalists.

Dressed in a dark suit and tie, Huhne, 58, stood grim-faced to hear his sentence. Wearing a black jacket, silver-grey roll-neck top and dangly earrings, Pryce, 60, appeared to be fighting back tears throughout the hearing.

The judge told the pair they would serve at least half of their sentences before being released on parole.

Huhne resigned as energy secretary in February 2012, when he and Pryce were both charged with perverting the course of justice. He spent the best part of a year fighting a costly legal battle, trying to get the charge against him thrown out.

That attempt failed when Judge Sweeney ruled at the end of January that he should face trial. Huhne initially pleaded not guilty, but a week later, on the morning the trial was due to start, he stunned Britain by changing his plea to guilty.

His lawyer, John Kelsey-Fry, told the court Huhne's 11th-hour guilty plea had taken courage and had avoided what would have been "a bloodbath" if Huhne and Pryce had stood trial together.

Instead, Pryce stood trial alone after pleading not guilty. She admitted taking Huhne's speeding penalty but put forward an archaic defense of "marital coercion", arguing that Huhne had bullied her into it.

A first jury failed to agree on a verdict on Pryce, but after a retrial a second jury convicted her on Thursday.

Pryce's trials revealed painful details of the breakdown of her 26-year marriage to Huhne.

He became a minister in May 2010, but within weeks a newspaper found out he was having an affair about which Pryce had been unaware.

The story was widely covered by the national press, with the added spice that Trimingham had previously been in a lesbian relationship.

Evidence shown at Pryce's trial revealed how, starting in November 2010, she spent six months plotting with journalists to try to get the story about the 2003 speeding deception into the papers in a way that would damage Huhne but not expose her.

"I definitely want to nail him," Pryce wrote to one journalist in a March 2011 email that was read out in court.