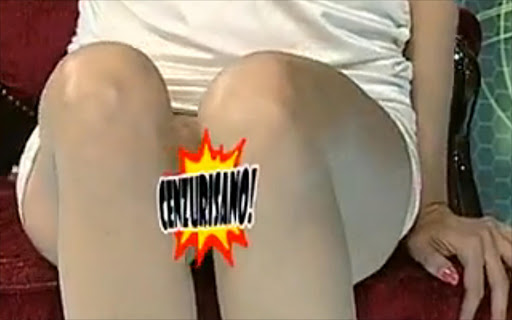 Serbia's prime minister, who was flashed by a model without underwear masquerading as a television interviewer, has launched an investigation into how he became the target of the prank, an aide said.

The video of Ivica Dacic being interviewed by a brunette former model from Croatian Playboy, who uncrosses her legs in a scene reminiscent of actress Sharon Stone in the film "Basic Instinct", has been viewed 2.7 million times on YouTube.

"This was Serbia being mocked, not the prime minister. The prime minister's office will not let this go unpunished," said Toncev. His office did not respond to requests for comments on the interview or the investigation.

The episode, set-up and filmed by a private Serbian production company, was not aired and the trailer for its prank television show Nemoguca Misija (Mission Impossible) was removed from its website.

The interviewer, who wore a low-cut, short silky dress for the encounter, said Dacic was a "real man".

"I have only good words for the prime minister," Blic quoted 35-year-old Branka Knezevic as saying.

"He is strong and sturdy, a real man for that position. He's exactly who should lead the country."

The prank drew on a scene in the 1992 film in which Stone, without underwear, crosses and uncrosses her legs to unsettle her police interrogators.

Serbs were divided over the clip which commentators said reflected the dubious mix of politics and low-brow pop culture in Serbia, a phenomenon that emerged during the wars and sanctions of the 1990s as federal Yugoslavia collapsed.

"He handled it well," said 28-year-old Belgrade clerk Dejan Perovic. "He's a man, and no man could remain emotionless in such a situation."

"It was contemptible," she said. "It was humiliating both for Dacic and the country and he should have banned it immediately and dismissed his entire public relations team."

Dacic, 47, is also Serbia's interior minister and was formerly the spokesman for late Serbian strongman Slobodan Milosevic during the bloody 1990s collapse of Yugoslavia.