Skeletons in the closet: Homeless Serbs live in Tomb 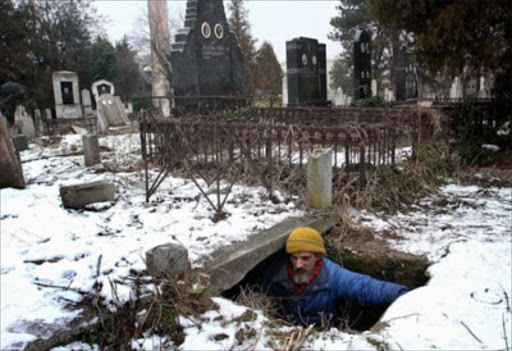 With a thin pink quilt pulled around his shoulders and three rusty metal coffins to keep him company, Bratislav Stojkovic is spending another freezing night inside a tomb at a long-forgotten municipal cemetery in the southern Serbian city of Nis.

He and his friend Aleksandar Dejic are the only two living tenants of the “Old Cemetery,” once known for its precious, intricately carved tombstones, which have long since vanished.

“I have never stolen anything. I did not even desecrate the grave I live in, it was already open,” Stojkovic says.

40 year-old Stojkovic has lived in the grave for more than a decade. When his father died in a fire that also destroyed his house, Stojkovic found himself homeless, jobless and with no friends or relatives to turn to for help.

Unshaven and with a woollen cap pulled down almost to his eyes, Stojkovic hunkers down under his quilt for another night in the sub-freezing temperatures of the Serbian winter.

The coffins, which contain the remains of a long-forgotten local family, are also covered up.

“I am not afraid of the dead, their souls are where they should be, either in hell or in heaven, while their bones bother no one now,” said Stojkovic, dressed in an old but clean, faded-green jacket.

“I just do not want my every glance to shift towards them.”  Dejic, 53, has been living here for two decades. His father, also homeless, brought him to the cemetery and they lived together in a chapel-like vault built in 1929 by “grateful daughter Angelina Veselic for her mother Milenija.”  But the father fell ill and died. Now his son passes his time in the windowless grave walled with bricks, sleeping on an old bed covered with a blue quilt.

Dejic’s only earthly possessions are a few jars filled with a dark liquid, scraps of leftover food and some old clothes.

Neither man has ever worked.

“I am a construction worker, but I couldn’t get a job anywhere,” says Stojkovic, as he recalls his first days being homeless in Serbia, during its transition from a communist state to a decade of wars that ravaged the Balkans in the 1990s.

HUNDREDS OF THOUSANDS FACED WITH HOMELESSNESS

International sanctions imposed to punish Belgrade for its role in the conflict led to growing homelessness. Factories that flourished under communism ground to a halt under the new economy.

Serbia has an estimated 200,000 homeless people among its population of 7.2 million, according to a rights group survey last year.

The poll showed 7% of the population live below the poverty line, while unemployment has reached 22.5%.

Serbia has also sheltered almost 300,000 Serb refugees from other former Yugoslav republics, and officials say at least one-third of them live in so-called collective refugee centres.

Only twelve towns in Serbia have homeless shelters, but these cannot keep up with demand, shelter volunteer Mirna Jokic said.

“We have beds for about 300 people in Belgrade, while we need at least three times more, especially during winter,” she said.

Neither Stojkovic nor Dejic receive welfare. Because they have no fixed abode, they cannot get identity cards.

“It’s a vicious circle and you cannot win: You need to have a residence if you want to be registered with social services,” Jokic said.

The situation may change in the future, after human rights activists won a long campaign to let homeless people use a shelter address as their residence.

“Grobljanci,” or “Graveyard men,” as Nis residents call the two men, survive by picking through trash, searching for leftovers and discarded clothes.

Nearby residents sometimes help, bringing food, clothes and even money.

Local authorities plan to transform the cemetery, closed since the 1970s, into a memorial centre. But a lack of funds will spare the two men from being forced to find a new shelter soon.

Both say they are “at peace” in their morbid lodgings. Visitors are rare, and only sometimes do they see a drug addict hiding behind the tombstones.

But Stojkovic worries about frightening passers-by.

“It is a real scare to see a man alive coming out of the grave,” he said.