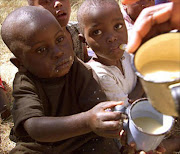 The Southern African country, once a regional breadbasket, has struggled to feed itself since 2000 when President Robert Mugabe began a drive to seize white-owned farms to resettle landless blacks.

It wrote off a third of its 2012 maize crop after a prolonged dry spell.

The call for assistance for Zimbabwe, whose economy was ravaged by hyperinflation between 2003 and 2008, was part of an $8,5 billion global appeal launched in December by the UN for aid agencies to help 51 million people cope with humanitarian emergencies in 2013.

The UN agencies said while the humanitarian situation in Zimbabwe had improved after the formation of a unity government by Mugabe and his rival Prime Minister Morgan Tsvangirai in 2009, problems remained.

“Humanitarian challenges remain, that include food insecurity mainly caused by drought, and sporadic outbreaks of waterborne diseases,” the UN office for the Co-ordination of Humanitarian Affairs said in a statement.

The UN said the southern part of Zimbabwe will continue to experience drought in 2013, raising the prospect of another poor harvest.