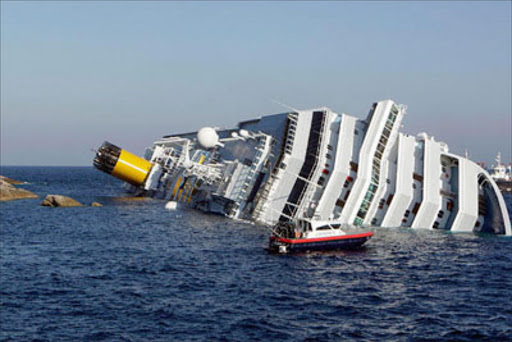 A year on from the Costa Concordia tragedy in which 32 people lost their lives, the giant cruise ship still lies keeled over on an Italian island and its captain Francesco Schettino has become a global figure of mockery.

An unprecedented salvage operation to refloat the ship is several months from completion and a trial for manslaughter against crew members and cruise executives is not expected until later this year at the earliest.

The night of the Costa Concordia will be remembered in a series of events on the anniversary on Sunday on the island of Giglio, where the ship crashed and keeled over with 4,229 people from 70 countries on board.

Ship owner Costa Crociere, the operator of Europe’s biggest cruise fleet, will also be organising masses in the chapels of all its vessels wherever they may be around the world and their flags will fly at half mast.

In the countries of origin of many crew members, there will also be Catholic masses in Lima and Manila, Muslim rites in Bali and Jakarta, Hindu services in Goa and Mumbai and a Buddhist ceremony in Shanghai.

On Giglio itself, locals are torn between wanting to remember an event that scarred this tiny community and the desire to get a ship twice the size of the Titanic off their shores and return to a sense of normality.

“The anniversary brings us back to those tragic moments and we will feel the same emotions, the same sadness... We just want our serenity back,” Sergio Ortelli, the mayor of Giglio, told AFP in an interview.

Twelve of the victims enjoying a Mediterranean cruise on the luxury liner were from Germany, seven from Italy, six from France, two from Peru, two from the United States, one from Hungary, one from India and one from Spain.

Ten people are being investigated for manslaughter including Schettino, dubbed “Captain Coward” in the tabloids for delaying the evacuation for over an hour and then abandoning ship with people still stranded inside.

“I have been tormented throughout the year for what happened the night of January 13. I have been painted as worse than bin Laden,” Schettino said in an interview with La Stampa daily earlier this week.

Three Costa Crociere managers are also among those investigated and groups of survivors are suing the company as part of international legal action that some hope will bring laws to make the global cruise industry safer.

As it tried a risky high-speed “salute” manoeuvre ordered by the captain in a homage to the island, the ship hurtled into a group of rocks known as “Le Scole” before veering sharply and coming to ground on a rocky shelf.

The evacuation, when it finally came, was chaotic because of the 90-degree tilt, when what had previously been walls became floors and ceilings.

Hundreds who could not take lifeboats jumped into the cold, dark sea, clambered down the hull or were plucked from the wreck by helicopter.

The ship is lying on a rocky underwater shelf within view of the port of Giglio and a salvage operation to refloat the rusty hulk and tow it to a port to be scrapped has suffered a series of technical delays.

The commemorations on Giglio will begin on Sunday at 0900 GMT with workers due to place the rock that the ship crashed into and then ripped from its base back near where it once stood — a symbol of a return to normality.

There will then be a mass in the same church in the port that served as a temporary refuge for drenched survivors in the hours after the tragedy.

Awards will also be given to rescue workers who scoured the ship for weeks, initially looking for survivors like the South Korean honeymooners plucked from the wreck, before the grim search began for bodies in the water.

In this seafaring community of 1,500 souls, fishing boats will then blare their sirens in a poignant memory of the exact moment the ship crashed.

For some caught up in the tragedy, however, there may never be closure.

“It’s been 12 months that I wake up each morning in the hope of getting the call,” Elio Vincenzi, husband of one of two people still officially missing among the 32 victims, told La Stampa.