From catwalk to perp walk - Models and gangsters 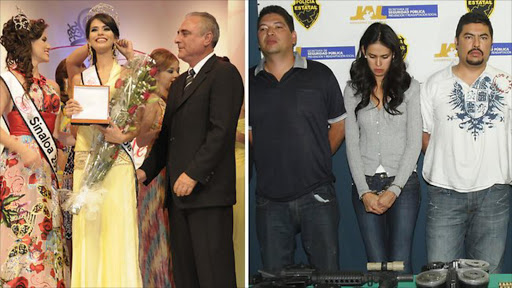 They are tall and slender beauty queens who sometimes fall into the arms of rich and ruthless Mexican drug traffickers.

Some have gone from the glorifying catwalk to the humiliating perp walk. But for Maria Susana Flores Gamez, Woman of Sinaloa 2012, it was a case of fatal attraction.

The 22-year-old brunette was killed in a gunfight between a suspected drug gang and soldiers in the northwestern state of Sinaloa last weekend.

Flores was riding in a car with suspected gang members, including her boyfriend, when the group engaged in a running gun battle with troops.

Four civilians, including Flores, and a soldier were killed in the shootout.

The troops reported that the model had come out of the car with a weapon in her hand but that she appeared to have been used as "a human shield," according to an official in the prosecutor's office.

Authorities suspect that the group was a cell working for the powerful Sinaloa drug cartel, led by Joaquin "El Chapo" Guzman, Mexico's most wanted man, himself married to a beauty queen.

People in Culiacan, the capital of Sinaloa, claim to have the most beautiful women of Mexico, reputed to be tall women with tough characters.

But some end up in relationships with drug traffickers who lavish them with expensive designer clothes, high heels and diamonds.

Gangsters "always want to be accompanied by beautiful women, and they transform them to their taste with plastic surgery," Elmer Mendoza, a Sinaloa native who writes novels about drug cartels, told AFP.

In 2007, six years after he escaped from jail in a laundry basket, Guzman married 18-year-old Emma Coronel Aispuro, whom he helped win a pageant at a local fair in the neighboring state of Durango.

Coronel reportedly gave birth to twin girls in California in August 2011 but was not arrested.

The case of Laura Zuniga, the winner of the Nuestra Belleza Sinaloa pageant in 2008, inspired the 2011 film "Miss Bala" ("Miss Bullet"), the story of an aspiring beauty queen who is forced into the shady world of drug gangs.

In real life, Zuniga was arrested in December 2008 in the western state of Jalisco along with seven suspected Juarez cartel members. She was later exonerated.

In 2011, Colombian model Juliana Sossa Toro was detained along with her boyfriend, suspected Mexican drug trafficker Jose Jorge Balderas, in Mexico City. She was later released.

The nexus between Sinaloa's beautiful women and powerful gangsters dates back decades.

In one of the oldest cases, Kenya Kemmermand Bastidas, "Senorita Sinaloa 1958," was found dead in Sicily six years after winning the pageant. She was married to Vittorio Giancana, the nephew of an Italian-American mafia capo.

Three years later, Arellano was arrested and sent to a maximum-security prison. He was released in 2008.

Jose Carlos Ceniceros, co-author of the book "Las Jefas del Narco" ("The Women Narco Chiefs"), said the dangerous world of drug trafficking can be a potent attraction to women with little economic opportunities.

"It's not only about money. It's also about power," he said. "There are female hitmen, for example, who may not be as pretty as the pageant contestants."

"They get used to a life of luxury and take risks, assuming they will die soon, but they want that fleeting moment of glory."