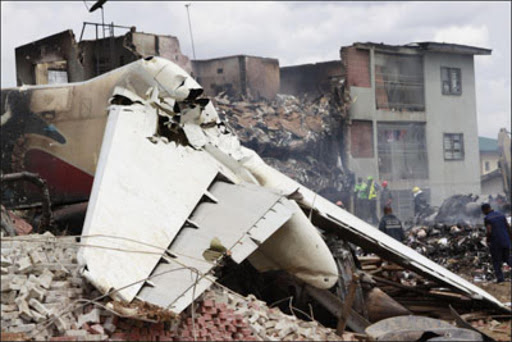 A Nigerian airline whose airplane crashed in the country's largest city, killing 153 on board and more on the ground, defended itself against growing public criticism.

Francis Ogboro, an executive who oversees Dana Air, also told journalists the MD-83 that crashed Sunday underwent strenuous checks like the others the carrier owns and that he routinely flies.

The chief engineer "certainly would not have allowed that aircraft to take off" if there was a problem, Ogboro said. "No airline crew would go on a suicide mission."

It is unclear from the fragments collected how many victims there are, officials said, acknowledging that a complete death toll could likely take weeks.

"I think we can only be sure of the number at the end of the scientific investigation that is going on," Lagos state attorney general Ade Ipaye said.

Officials now plan to survey the neighborhood to find who remains missing after the plane smashed into two apartment buildings, a printing business and a woodshop, Shuaib said. Those still missing would be presumed dead until DNA testing or other forensic tests links them to the dead, officials said.

During a news conference Wednesday, authorities said relatives of the dead should come to Lagos to provide tissue samples and be photographed. However, such DNA testing likely would need to be done outside of Nigeria, a nation with erratic electricity from a state-run power company and a largely mismanaged government.

The cause of the crash on a sunny, clear Sunday afternoon remains unknown. The flight's captain radioed Lagos as the aircraft approached and declared an emergency, saying both of the MD-83's engines had failed, Aviation Minister Stella Oduah said. The plane crashed minutes later.

Ogboro and others declined to speculate what could have made both of the aircraft's Pratt and Whitney engines go out in the last minutes of the flight. The aircraft, manufactured by McDonnell-Douglas which was later bought by Boeing, requires a flight engineer to manage the fuel supply while in operation rather than having a computer monitoring it like on newer aircraft.

Authorities already have collected the flight voice and data recorders from the airplane and plan to send them to the U.S. for analysis, Oduah said. The U.S. National Transportation Safety Board also has sent an investigator to assist Nigeria's Accident Investigation Board, which probes airplane crashes.

Others killed in the crash included at least seven Americans, at least four Chinese citizens, two Lebanese nationals, a French citizen and a Canadian, officials have said.

Popular anger has risen in Nigeria against the airline since the crash. The Nigerian government said it indefinitely suspended Dana Air's license to fly as a safety precaution. However, while offering sympathy for those who died in the crash, Ogboro predicted the airline would resume operations within a few weeks after proving to the government its fleet of MD-83s are safe.

"We ensure that we go by the rules," he said. "I am almost certain they will find that we have not done anything contravening the aviation rules, because all of those aircraft are well maintained. There's absolutely no doubt about that."

Yet identifying the dead likely will take longer, officials say, while the remaining building and rubble at the crash site have been leveled. At the site Wednesday, a worker in a yellow safety vest flipped through a photo album pulled from the debris, a series of photographs of weddings and christenings smeared with mud.

Nearby, a crane lifted up the tail of the crashed plane as workers began to remove pieces of the aircraft from the site. Fresh black paint covered over the faded Dana Air logo on the fuselage.