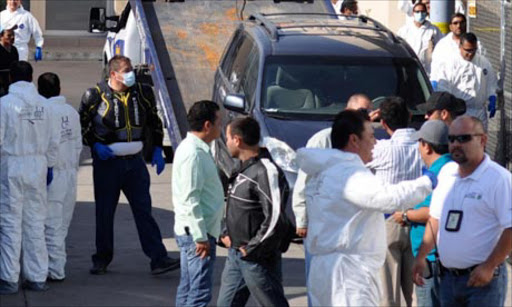 Police found 18 dismembered and beheaded bodies inside two vans in an area frequented by tourists near the city of Guadalajara in western Mexico, authorities said.

Jalisco state Prosecutor Tomas Coronado said earlier police found 15 severed human heads in the vans a few miles from Lake Chapala and his office confirmed later in a statement that three more heads had been found along with the other body parts.

"The bodies are dismembered," Coronado said in an interview transcript provided by his office. He said authorities received a phone call alerting them to the presence of two minivans on a dirt access road near Lake Chapala, which is popular with tourists and American retirees.

The vehicles were towed to government offices to unload the bodies.

The area has been the scene of bloody turf battles between the Jalisco New Generation gang, allied with the Sinaloa cartel, and the Zetas drug cartel.

Mexican drug cartels frequently dismember the bodies of their victims or leave them stuffed into vehicles. The gangs also frequently leave hand-written messages alongside their victims' bodies, and Coronado said that such messages were found in the vans.

"They are clearly messages between rival groups that are in conflict," Coronado said.

Coronado also said the killings may have been linked to the abduction of 12 people who later escaped in the same area on Tuesday. A woman who was allegedly watching the captives was detained. She told investigators that the kidnappings were "a repercussion of what happened in Tamaulipas."

Messages were found in Nuevo Laredo threatening the Gulf cartel, which has joined Sinaloa to battle the Zetas. The killings could be part of a wide-ranging, tit-for-tat battle between Sinaloa and the Zetas, in which both sides have been known to massacre dozens of people accused of supporting the rival gang.