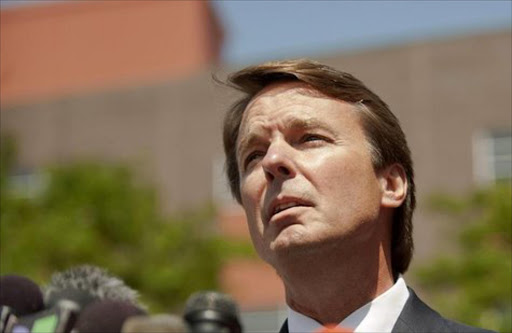 Prosecutors portrayed disgraced Democratic politician John Edwards as a liar as he went on trial for allegedly using campaign money to hide an affair from the public and his cancer-stricken wife, but the defense said his "sin" was not a crime.

The 58-year-old Edwards, a two-time presidential hopeful, faces six criminal charges related to accepting nearly $1 million to hide his affair with videographer Rielle Hunter and the child he fathered with her.

In their opening statements, prosecutors argued that the former US senator broke the law by accepting the cash as an illegal contribution to his 2008 presidential campaign so he could maintain his clean family-man image.

Prosecutor David Harbach said in opening statements that Edwards's "image of a family man was critical to his campaign," and that he would do "anything to maintain his chance of being president."

But the credibility of their key witness, former top Edwards aide Andrew Young, was quickly called into question.

Young also was forced to acknowledge two arrests -- one for his role in a 1997 car accident, and the second for drunk driving in 2006 in which he spent a night in jail.

At the time of the scandal, Edwards was married to his college sweetheart, attorney Elizabeth Edwards. The couple had four children, including a teenage son who died in a freak automobile accident in 1996.

By all appearances it was a model family -- so perfect that in 2007 a charity even granted Edwards an award as "Father of the Year."

In order to maintain that image, "Edwards did what he always did -- deny, deceive, manipulate," Harbach told the court.

Defense attorney Allison Van Laningham acknowledged that her client --himself a skilled trial lawyer -- was not perfect, but said that did not make him a criminal.

"The truth for John Edwards may be a sin, but it is not a federal crime," she told the court, noting that her client "fell from grace in a very public, very humiliating way."

Edwards did not ask for the money that was used to hide the affair from his wife, Van Laningham said, and the contributions were unrelated to the campaign.

At the time, under federal law, individuals could give a maximum of $2,300 for a political campaign.

Baron's widow is on the list of witnesses along with an attorney representing Mellon, who is too frail to travel to Greensboro from her Virginia estate.

Edwards's defense claims that Young siphoned off much of the money to build a $1.5 million home, and that it was his idea to claim the child's paternity in order to stay close to Edwards and the rich donors.

Young, 46, testified that he was impressed when he first saw Edwards speak in 1998 and soon after went to work on his Senate campaign.

When Edwards was elected, Young became a close confidant and toured across North Carolina with the senator.

"We were two North Carolina boys and we had a lot in common," Young told the court.

Young said that Mellon, a friend of former first lady Jacqueline Kennedy, was convinced that Edwards was a combination of the best of slain Democratic president John F. Kennedy and his late brother Robert.

"She felt he would be the savior of America," Young said. "She asked, 'What can I do to help?'"

According to the government, the "help" came in the form of hefty checks written to a third person, who then gave the cash to Young.

"This case has turned into John Edwards versus Andrew Young," Hampton Dellinger, a North Carolina lawyer who is closely following the case, told AFP.

Young's two arrests and his effort at contacting witnesses are "not going to help the government's case," said Dellinger.

Edwards was in the courthouse along with his eldest daughter Cate, a 30-year-old attorney that lives in Washington, and his aged parents, Bobbie and Wallace.

Elizabeth Edwards attracted enormous sympathy when it became known she had battled cancer while grappling with her husband's infidelity. She died in December 2010.

Edwards publicly admitted to the affair with Hunter in August 2008, after his presidential bid ended, but refused to publicly recognize that he had fathered the child until January 2010.

A group of nine men and seven women -- nine whites and seven African-Americans -- were chosen for the 12-member jury. Four of the jurors will serve as alternates.