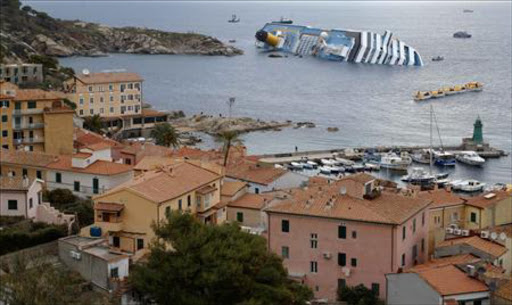 Rescue workers searched the half submerged hulk of a capsized Italian cruise ship for 14 people still missing on Monday, more than 48 hours after the huge vessel capsized, killing at least six and injuring more than 60.

A sixth body, that of an adult male passenger, was found just before dawn on Monday, according to Italian television.

Nine passengers, one of them a young child according to Italian media, and five crew members were still unaccounted for from the disaster off Italy’s west coast.

The captain of the 114,500 tonne Costa Concordia was arrested on Saturday, accused of manslaughter and abandoning his ship before all of the more than 4,200 passengers and crew had been evacuated.

Francesco Schettino’s employers, Costa Crociere, said in a statement on Sunday that he appeared to have made “serious errors of judgment” and had brought the ship too close to shore, where it struck a rock that tore a large hole in the hull.

The disaster occurred when the ship struck a rock as dinner was being served on Friday night, triggering scenes of panic that witnesses said were like the film “Titanic” with passengers jostling to get on lifeboats and some leaping into the icy sea.

Passengers say there were unexplained delays in organising the evacuation of those on board and this had resulted in chaos.

The vast hulk of the 290-metre-long ship, half submerged and lying on its side, loomed over the little port of Giglio, an island in a maritime nature reserve off the Tuscan coast.

A large gash could be seen in its hull but salvage experts said its fuel tanks did not appear to have been damaged, lessening the danger of an oil spill in the pristine waters.

Paolo Tronca, a local fire department official, said the search would go on “for 24 hours a day as long as we have to”.

Investigators were working through evidence from the equivalent of the “black boxes” carried on aircraft to try to establish the precise sequence of events behind the disaster, which occurred in calm seas and clear weather.

Defence Minister Giampaolo Di Paola, a naval admiral, said the disaster did not appear to have been caused by natural or technical factors.

“In my estimation there was a serious human error, which had dramatic and tragic consequences,” he told RAI state television.

“The route followed by the ship was too close to the coast and it seems that his decisions on the management of the emergency did not follow the procedures of Costa Crociere,” said the company.

Prosecutors accused Schettino, who has worked for Costa Crociere since 2002 and who was promoted to captain in 2006, of leaving the ship before the evacuation was complete.

Coastguard officials said he had refused to return to the vessel when asked to.

Schettino has told Italian television that the ship hit rocks that were not marked on maps and were not detected by navigation systems. He said the accident occurred some 300 metres from shore.

It said all crew had been properly trained in safety procedures and that the ship was fully equipped with life jackets, medical supplies and other safety equipment.