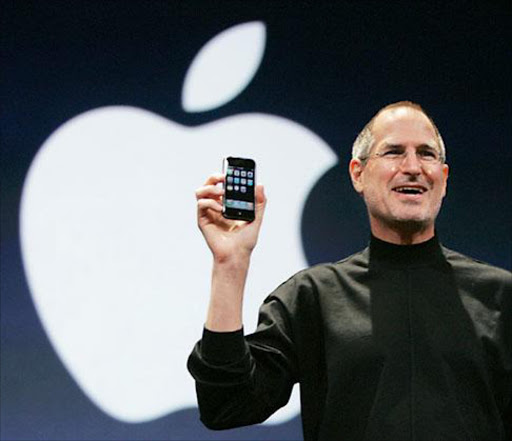 Steve Jobs, who transformed the worlds of personal computing, music and mobile phones, died on Wednesday at the age of 56 after a years-long battle with pancreatic cancer.

The co-founder of Apple Inc, one of the world’s great entrepreneurs, was surrounded by his wife and immediate family when he died in Palo Alto, California. Other details were not immediately available.

His death was announced by Apple and sparked an immediate outpouring of sadness and sympathy from world leaders, competitors and other businessmen including Microsoft co-founder Bill Gates and Facebook CEO Mark Zuckerberg.

The Silicon Valley icon who gave the world the iPod, iPhone and iPad had stepped down as chief executive of the world’s largest technology company in August, handing the reins to long-time lieutenant Tim Cook.

He was deemed the heart and soul of a company that rivals Exxon Mobil as the most valuable in America.

“Steve’s brilliance, passion and energy were the source of countless innovations that enrich and improve all of our lives.

The world is immeasurably better because of Steve,” Apple said in a statement.

“His greatest love was for his wife, Laurene, and his family. Our hearts go out to them and to all who were touched by his extraordinary gifts.”

TRIBUTES PAID TO HIM BY THE WORLD:

The death of Apple Inc (AAPL.O) co-founder Steve Jobs prompted an outpouring of comments and tributes from political, technology, entertainment and business leaders. A selection:

“Steve and I first met nearly 30 years ago, and have been colleagues, competitors and friends over the course of more than half our lives. The world rarely sees someone who has had the profound impact Steve has had, the effects of which will be felt for many generations to come. For those of us lucky enough to get to work with him, it’s been an insanely great honor.”

“Steve, thank you for being a mentor and a friend. Thanks for showing that what you build can change the world. I will miss you.

“Steve Jobs was a great friend as well as a trusted advisor. His legacy will extend far beyond the products he created or the businesses he built. It will be the millions of people he inspired, the lives he changed, and the culture he defined. Steve was such an ‘original,’ with a thoroughly creative, imaginative mind that defined an era. Despite all he accomplished, it feels like he was just getting started.”

“Steve Jobs is an inspiration to American entrepreneurs. He will be missed.”

“Steve lived the California Dream every day of his life and he changed the world and inspired all of us.”

“Steve was the best of the best. Like Mozart and Picasso, he may never be equalled.”

“We’ve lost a unique tech pioneer and auteur who knew how to make amazingly great products. Steve fought a long battle against tough odds in a very brave way. He kept doing amazing things in the face of all that adversity. As someone who has had his own medical challenges, I couldn’t help but be encouraged by how he persevered.”

“Today the world lost a visionary leader, the technology industry lost an iconic legend and I lost a friend and fellow founder. The legacy of Steve Jobs will be remembered for generations to come.”

“He was a great man with incredible achievements and amazing brilliance. He always seemed to be able to say in very few words what you actually should have been thinking before you thought it. His focus on the user experience above all else has always been an inspiration to me.”

“I feel honored to have known Steve Jobs. He was the most innovative entrepreneur of our generation. His legacy will live on for the ages.”

“The world is a better place because of Steve, and the stories our company tells have been made richer by the products he created. He was a dynamic and fearless competitor, collaborator, and friend. In a society that has seen incredible technological innovation during our lifetimes, Steve may be the one true icon whose legacy will be remembered for a thousand years.”

“Once in a rare while, somebody comes along who doesn’t just raise the bar, they create an entirely new standard of measurement. #RIPSteveJobs”

“Steve Jobs was a visionary and a wonderful friend of The New York Times. He pushed the boundaries of how all providers of news and information interact with our users. I am among the many who deeply regret his passing.”

“Steve was one of a kind. For many of us working in technology and entertainment, Steve was a new kind of hero that lead with big, bold moves and would not settle for less than perfection. He is the best role model for a leader that aspires to be great.”

“VISIONARIES are always called CRAZY in the beginning. A VISIONARY sees things that everybody else says is IMPOSSIBLE, sees a World that People can’t invision (sic)-MAC, IPOD, IPAD, IPHONE, ITUNES and PIXAR. I have nothing but Love for Mr. Jobs and Apple, they have always given me and my films L-O-V-E.

Peace and Blessings to his family.”