Man sleeps with dead wife, refuses to bury her 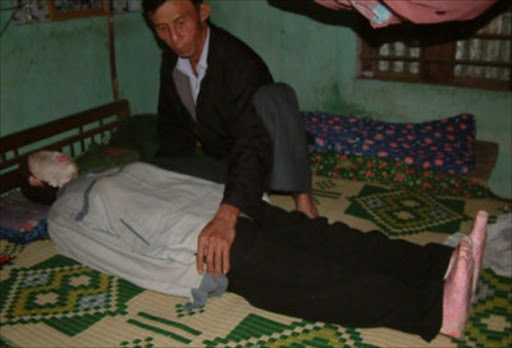 EISH! He dug up the bones of his dead wife a year after she died, and has slept beside them ever since - 7 years!!

A man in central Vietnam has admitted sleeping beside the bones of his dead wife for seven years despite pressure from authorities to bury her, local media reported Wednesday.

Father of seven Le Van said he dug up the bones of his dead wife in 2004, a year after she died, and has slept beside them ever since, online news site VietnamNet reported.

There are no laws banning him from keeping his wife’s remains at  home, but officials said the bones were polluting the environment.

The article includes photos of Van posing outside his front door and in his bedroom with the life-size casket.

The painted coffin, made of gypsum and clay, is modelled in the shape of a woman and dressed in women’s clothes.