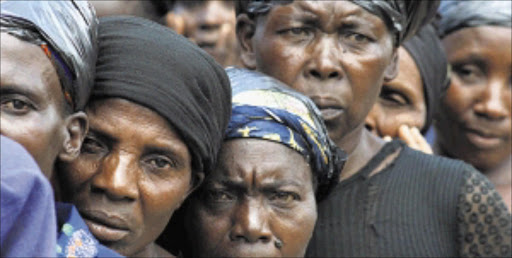 THREE groups of armed militia could have committed crimes against humanity when they raped at least 387 people in the Democratic Republic of Congo in 2010, a UN probe said yesterday.

"Due to the fact that these attacks were well-planned in advance and carried out in a systematic, targeted manner, they could constitute crimes against humanity and war crimes," investigators said in a report.

The UN probe was set up to look into human rights violations committed between July 30 and August 2, 2010, in 13 villages in the Walikale territory of Nord Kivu.

It blamed the rapes on members of the Mai-Mai Cheka group, the rebels of the Democratic Forces for the Liberation of Rwanda and a group connected to army deserter Emmanuel Nsengiyumva.

In addition, at least 923 houses and 42 shops were looted. Another 116 civilians were abducted and subjected to forced labour.

"By using rape as a weapon of war, as a means of terror and to ensure the enslavement of civilians, by planning, organising and attacking people in 13 villages along the Kibua-Mpofi axis, the armed militia coalition breached international law on the protection of civilians," said the investigators.

The UN team noted that the leaders of the three armed groups did not directly take part in the rape.

But they said this did not exempt the leaders from criminal responsibility as they had prior knowledge of the plan of attack.