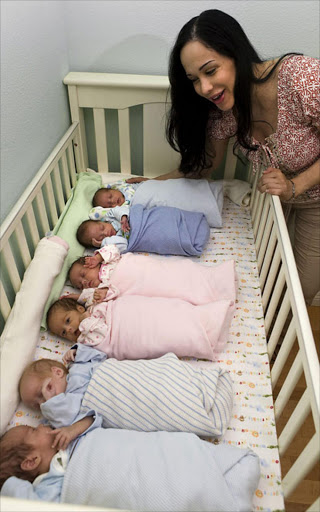 The fertility doctor who helped an unemployed, unmarried mom of six give birth to octuplets - 8 more babies! - was 'grossly negligent'

The California Medical Board has revoked Dr Michael Kamrava’s license effective July 1,  according to documents on its website alleging a number of cases of  malpractice, chief among them the creation of the tabloid sensation dubbed “Octomom”.

The Beverly Hills-based board said Kamrava had committed “gross negligence, repeated negligent acts and incompetence” when he repeatedly implanted multiple embryos into Nadya Suleman, identified as “N.S.” from 2002 to 2008.

In 2009 Suleman — who was unmarried, unemployed and already had  six children — gave birth to octuplets after Kamrava implanted 12 embryos the year before, far more than the maximum recommended three.

The medical board filed two lawsuits against Kamrava in 2010, accusing him of negligence and of failing to recommend that Suleman consult a mental health specialist.

The board has faulted Kamrava’s treatment of other patients as well, including his alleged failure to tell one of his patients she  was at risk of ovarian cancer after abnormal test results.