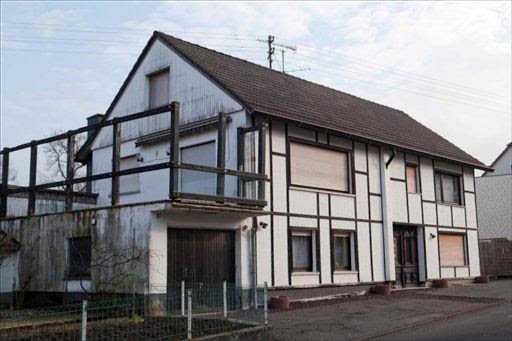 The father began molesting his daughter when she was 9 years old, and started raping her on her 12th birthday. He abused his twin stepchilden from the age of only 4 years

The father first raped his daughter on her 12th birthday, after the other children had left her party, prosecutors said as a stomach-turning incest case opened in western Germany.

The 48-year-old German, identified only as Detlef S. in line with privacy rules, sat stone-faced Tuesday at the state court in Koblenz as Judge Winfried Hedge read aloud a letter written by his daughter, now 18.

“You made my life a living hell,” she wrote.

Detlef S. is charged with 350 counts of sexual abuse - tormenting his daughter, stepdaughter and stepson for over 20 years.

He also faces 35 other sexual counts for forcing the two girls to have sex with other men for money.

He faces up to 15 years  in prison if found guilty.

No plea was entered as the trial opened, which is normal for German proceedings, but defence attorney Thomas Dueber read a statement in which the defendant admitted to fathering his stepdaughter’s seven children.

Prosecutors said before the trial that DNA samples confirmed that. An eighth child died before DNA tests could be done.

Detlef S. first began molesting his daughter when she was nine, and after the 12th birthday party he regularly sexually assaulted her, prosecutors told the court, the DAPD news agency reported.

He had already been abusing his twin stepchildren, who are now 28, starting in 1987 when they were only four years old, until 2010, according to the indictment.

Attorney Katharina Hellwig, who represents the stepdaughter, said she had been hoping the father would confess so that her client would not have to take the stand and relate her story.

Instead, judges cleared the courtroom of spectators and heard the stepdaughter’s testimony behind closed doors.

After that testimony, the judge said prosecutors are also investigating whether the suspect assaulted a daughter he had with his stepdaughter in 2004.

Bjoern B., the stepson, left the trial after about an hour, appearing shaken. He told reporters he had heard “terrible stuff” in the courtroom but felt it was necessary to be there.

“I wanted to give my sister strength to go on with this,” he said. “We are in this together, and together we are trying to have the strength to live through this. It would make no sense to do this alone.”

Detlef S., a truck driver who lived in the small town of Fluterschen, near Bonn, did not address the court himself. He has been in custody since August after his daughter came forward to authorities.

Outside the court, Dueber said his client was not admitting the charges against him.

“He acknowledged paternity ... but paternity is not part of the indictment,” Dueber said. “He’s innocent until proven guilty.”

The trial resumes Wednesday, and a verdict could come as early as the end of this month.

Two of the men who paid to have sex with his daughters also face charges and will be tried separately.

Germany’s Bild newspaper has called the suspect the “German Fritzl” — a reference to Europe’s most infamous case of incest.

Austrian Josef Fritzl was found guilty in 2009 of locking his daughter in a dungeon for 24 years and fathering seven children with her. He is serving a life sentence.