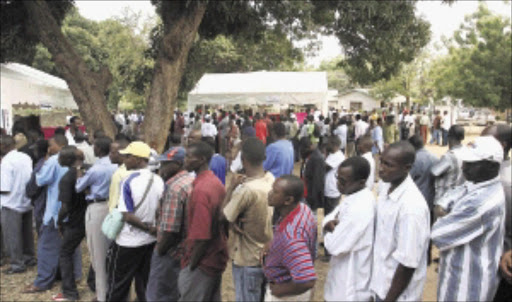 Television stations broadcast images of long queues in mainland Tanzania and the Indian Ocean archipelago of Zanzibar, where a presidential election was also taking place. Some polling stations opened late and there was confusion at some others as voters failed to find their names on lists.

"It's been very peaceful ... things seem to be reasonably well organised by the electoral commission," said Paul East, head of the Commonwealth election observers' group in Tanzania.

"We are concerned that the names of some people are not on the voters' roll and these reports seem to be reasonably common," the former New Zealand attorney general told Reuters.

A country of 40,7 million people, Tanzania is Africa's third biggest gold producer, exports coffee and is a popular tourist destination, but despite impressive growth rates half of the population still live on less than a dollar a day.

Kikwete's first term has been dogged by several corruption scandals and critics accuse him of not doing enough to stamp out graft or improve basic infrastructure, health services and education.

Analysts say Chadema has been gaining support among young first-time voters but that turnout would need to be well over 60percent of the 19,6 million registered voters for Slaa, a former Roman Catholic priest, to stand any chance.

Slaa, 62, has pledged to review all major mining contracts if elected amid complaints that the government is not earning enough in tax and royalties from its mineral resources.