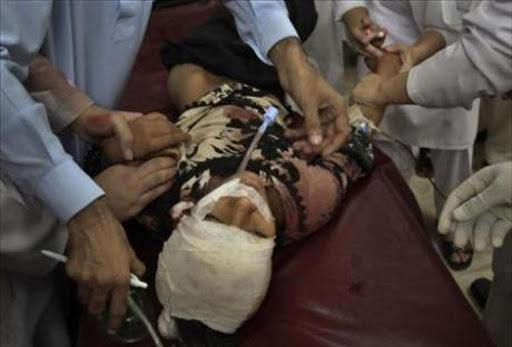 At least 20 people were killed.

The blast in the northwestern garrison town of Kohat came hours after the Taliban threatened more suicide attacks (on a government and security forces already overwhelmed by the worst flooding in Pakistani history).

A number of houses collapsed from the force of the blast and rescuers sought to dig out their occupants.

Police official Dilawar Khan Bangash said several other people were in critical condition and the death toll could rise. Earlier, local authorities estimated that at least 50 people were injured.

Shortly afterwards, a police patrol hit a roadside bomb in the nearby town of Hangu, and several policemen were wounded.

"While the nation is passing through difficult times due to devastating floods, these coward criminals have killed innocent Muslims when they were breaking their fast in their homes," Gilani said in a statement.

Islamist militants have killed nearly 120 people in suicide bombings since resuming a bloody campaign last week to topple the government after a one-month lull during the floods.

A Taliban spokesman on Tuesday threatened more suicide attacks on security forces and government offices in response to U.S. drone aircraft strikes on its members in tribal areas.

"Americans are carrying out drone attacks with the permission of Pakistan and we will take revenge with suicide attacks on security forces, police and government offices," Taliban spokesman Azim Tariq told Reuters by telephone from an undisclosed location.

"Drone attacks have killed dozens of innocent women and children but America has never expressed its regret."

Nineteen people, including policemen and children, were killed in a suicide bombing at a police station in the northwestern town of Lakki Marwat on Monday.

Renewed violence and the floods, which have killed more than 1,700 people and made millions homeless, have raised questions about the stability of nuclear-armed Pakistan, which Washington sees as a vital ally in the U.S. war against militancy.

In the past week, drone attacks killed at least 21 suspected militants in the Waziristan region, which is near the Afghan border and is described as a global hub for militants.

The U.S. has stepped up drone missile strikes in Pakistan's northwestern tribal belt since a Jordanian suicide bomber killed seven CIA employees at a U.S. base in Afghanistan in December.

Last week, U.S. prosecutors charged Hakimullah Mehsud, the leader of the Pakistani Taliban who appeared in a farewell video with the Jordanian, in the plot to kill the CIA employees.

Containing the Taliban will be especially difficult now for the government, which has been widely criticized for its slow response to the floods and is under growing pressure to help rebuild and provide millions of flood victims with compensation.

Pakistan's government is also battling with the perception that any aid money it handles will not reach flood victims.

According to the United Nations, only 22 percent of aid coming to Pakistan is channeled to the government, with the rest administered by the world body, the Red Cross and Red Crescent Movement, and international and Pakistani NGOs.

"People need cash right away to rebuild their homes and their means of making a living," Ajay Chhibber, the U.N. Development Programme's director for Asia and the Pacific, told a news conference in Islamabad.

"Credible oversight and monitoring mechanisms in the country will help to attract more funding resources for the monumental task ahead in all of the flood-affected area."