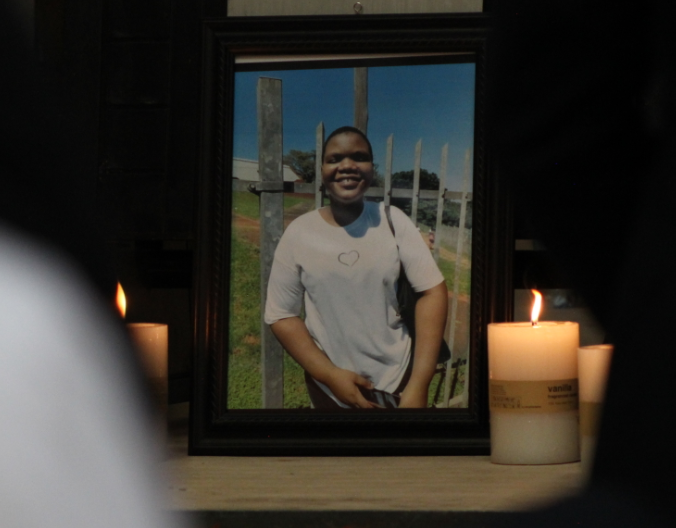 Xolile Mbatha was murdered at an MUT residence over the weekend.
Image: Nqubeko Mbhele

The family of murdered Mangosuthu University of Technology student Xolile Mbatha said losing a child so close to completing her studies was a devastating blow.

Mbatha died after being stabbed by a male student in her Ark Royal residence bathroom in Durban on Sunday morning. Police said it was a domestic dispute.

Mbatha, who hailed from the rural town of Umsinga, was a final-year electrical engineering student .

On Friday, MUT held a memorial service in her honour at the university’s Bozzol hall in Umlazi before fellow students marched from the Ark Royal residence to the South Point police station to demand a speedy arrest of her killer.

Proceedings were concluded with a night vigil.

Fellow students and friends described the 23-year-old as a humble individual who always reminded them when it was time to study.

Phakade Ndwandwe, one of her roommates, said Mbatha — whom she referred to as Thoko — played an elder sister role to her and her other roommate.

“Thoko was our elder sister but you wouldn’t see that from how she treated us. She was always humble and always reminded us to study, even if she’s not in our room she would send a message. She was busy sending application letters because she was almost done with her studies,” she said.

“If you went to study late, she would make sure she calls to find out if you’re still all right before going to sleep.”

However, he questioned the steps taken by MUT after a similar incident in 2018 when another student was murdered at a MUT residence.

In that incident, a 21-year-old student at the university, Zolile Khumalo, was shot dead by her ex-boyfriend, Thabani Mzalo, at the Lonsdale student residence in the Durban CBD. He was sentenced to life in 2020.

“Sadly, I was told this is the second time an incident like this happened. What was done after the previous incident?” he said.

He said MUT should avoid a situation developing where its residences are perceived as “death traps” for female students.

There are many cases that get reported to us where female students are abused by their boyfriends but sometimes they don’t want to report them because they are afraid they (boyfriends) would be expelled.

Siphakamiso Madlala, head of student housing, said Mbatha's father had told them he thought it was not the first time the suspect had allegedly abused his daughter.

He urged students — whether victims or friends of victims — to report cases of violence.

“There are many cases that get reported to us where female students are abused by their boyfriends but sometimes they don’t want to report them because they are afraid they (boyfriends) would be expelled,” he said.

“The next thing you find out a student has been absent for two weeks because she had bruises so she didn’t want to leave her room.”

Sanelisiwe Mnyandu, chairperson of the students affairs committee of the MUT council, said they would not tolerate “thuggery” and “violence” at the university.

“You are old enough now. We can't stop you from having romantic relationships but we have every right to intervene as a university when there is abuse and when we do, we will not show any mercy that the decisions we make can destroy your future. There is no future for a student who commits a crime” she said.

Prof Marcus Ramogale, MUT acting vice-chancellor, vowed to ensure that “violent” students would be removed from the university.

“We cannot have criminals, we cannot have murderers in our community. For that matter, we cannot even have people who destroy educational infrastructure. They don’t belong to a university, they belong elsewhere, perhaps in prison.”

He encouraged students to report any leads or information about the suspect to the police and not to take the law into their own hands.

“This person is a danger to society. No women is safe as long as he is on the run. He has to be arrested and put behind bars as soon as possible.”

Ramogale vowed to launch a “very long-term campaign” against gender-based and other forms of violence in the institution.

“We will be launching a campaign against gender-based violence because we’ve seen that this is a new trend where people are increasingly resorting to violence.

“It’s going to be a very long-term campaign that we will have on a yearly basis, to raise awareness about the futility of violence. Violence is futile, it doesn’t help you nor the society. Ask the criminals behind bars and they will tell you they were lost.”

Madlala suggested prospective students be screened for any history of violence before being registered.

Mbatha will be laid to rest on Saturday at her home in Umsinga.

A transport supervisor who testified at a disciplinary hearing of a co-worker paid for his testimony with his life.
News
5 months ago

As today marks a year since the death of Mthokozisi Ntumba, dozens of students are expected to display works celebrating him as they push for the ...
News
5 months ago

There are growing calls for law enforcement and security to be intensified in schools following a number of fatal shooting incidents in various ...
News
6 months ago

Gangs in the Western Cape use women and girls as young as 12 to do their work for them, according to research conducted at Stellenbosch University.
News
11 months ago
Next Article