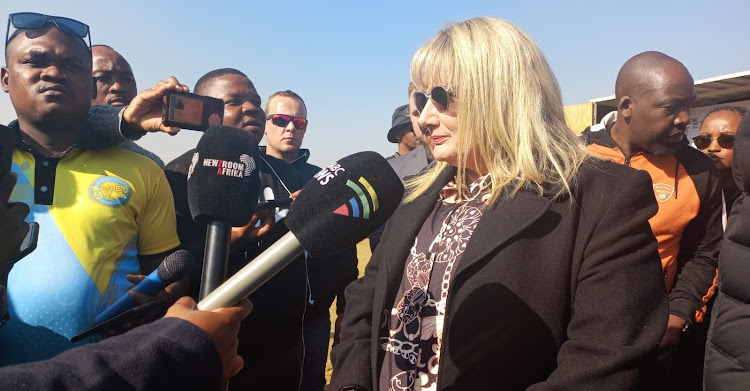 City of Ekurhuleni mayor Tania Campbell has extended an olive branch to the residents of Tembisa by promising them a 50% historic debt write off and giving them 50kw of free electricity units.

She started by apologising to residents for not meeting up with them when they asked before announcing that qualifying residents with historic debt would be exempted.

“We will provide you with 50% write off of debt in access of 1 year on date of application and approval inclusive of rates service charges interests and other costs. The scheme will be available for qualifying applicants with effect from July until march 2023.”

She, however, did not explain who qualifies for this scheme.

Residents who took to the streets on Monday complained of high water and electricity bills and Campbell acknowledged that there were problems with the billing system. While she failed to elaborate what exactly those problems were, she said they would be resolved.

“We will also ensure that the bills of water sanitation rates and taxes are separated from the electricity bill. No one should be paying more than what is regulated,” she said.

“With the indigent policy, we are in the process to ensure that all residents who qualify can be assisted. The amendded policy will be gazetted for public comment. In the meantime, we will stop any disconnections and declines of indigent applications for the next 90 days.”

While Tembisa township in Ekurhuleni burned yesterday with protesters taking their frustrations to the streets because of service delivery, mayor ...
News
5 days ago

She committed to reinstating the free basic electricity units programme, but said the municipality could not afford to give the 100kw that was given by the previous administration and could only give half.

“We will have to speak to Treasury and national government for them to assist us with the other 50kw but that will be another process.”

However residents did not buy into her offers, saying it was just another talk shop.

Siyabonga Masina, 27, said the mayor failed to give details on issues that required it and barely touched the surface.

“It was more of a media briefing. Some of the issues have finer details such as the indigent matter. She doesn't tell us what the criteria is, what the threshold will be, who will qualify. She said nothing.

“On the electricity part, they took the decision to do away with the 100kw free units and they never consulted Treasury on that. They have a right to give us those units without going to Treasury. She was playing mind games. I have no hope that any of the things she said will come to life.”

Another resident, Themba Luvuno, 52, said: "She still did not respond to our request to cut out the middle man when buying electricity. It's killing us.

“She failed to explain why we have to buy electricity from the municipality and directly from Eskom and why our units are so little. We buy for R150 and get about 87kw... where do the rest go?”

However the Tembisa Community Forum welcomed the mayor's approach, saying it was a step in the right direction.

“This is exactly what we wanted, to see initiative and effort from our government. We will sit down with them and get more details of some of the things she was saying and come back to the community to explain in simpler terms,” said spokesperson Xolani Mnisi.

“Had the mayor responded earlier, I do believe there wouldn't have been a protest on Monday.”

Poor families in Tembisa, on the East Rand, say they have been removed from the indigent programme by the City of Ekurhuleni and no-one is able to ...
News
3 days ago

Ekurhuleni mayor Tania Campbell has called for calm in Tembisa as a second person was shot dead during a protest on Monday.
News
6 days ago
Next Article