Maile angry over welder’s death as Thembisa protest called off 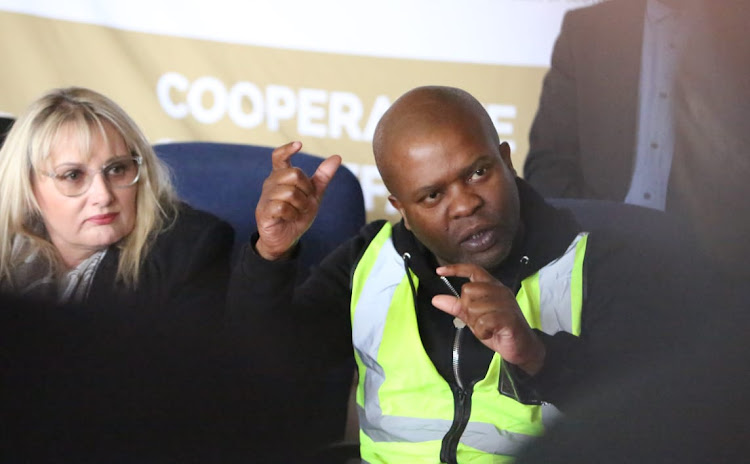 “As far as I know and as far as we have stated, it’s over,” the chairperson of the Tembisa community forum, Zamani Sithole, told journalists outside the township’s police station.

“We say there must be peace until such time that whatever happened has been resolved.”

The community has been complaining about high electricity tariffs.

An electrical substation and municipal centre were damaged during the service delivery protests that erupted on Monday morning, leaving behind a trail of damage. Some of the roads are still barricaded with stones and the ashes of burning tyres.

Four people died in the turmoil, two of whom were allegedly killed when a gas cylinder exploded while they were trying to bomb an ATM and one allegedly after being shot by an Ekurhuleni metro police officer.

While Tembisa township in Ekurhuleni burned yesterday with protesters taking their frustrations to the streets because of service delivery, mayor ...
News
1 week ago

Pheta Molonyama, 43, and another victim whose identity Sowetan is withholding, were shot allegedly by metro police officers after chaos erupted in ...
News
1 week ago

Two of the deceased have been identified as Eugene Shabalala, a chef, and Pheta Molonyana, a welder.

Maile, Ekurhuleni mayor Tania Campbell, city and provincial officials visited some of the bereaved families after a briefing at the Thembisa police station.

Speaking during the community meeting with Maile and metro officials, Sithole said the issue of criminality doesn’t mean the residents of Thembisa are criminals. “Once there is a solution to the problems, it will be addressed,” he said.

Campbell said they would meet residents on Friday, once they had received information on issues relating to the community’s demands, which they were investigating, so they could give proper feedback.

“I have asked certain departments to investigate issues for me [from the memorandum of demands], where we then as a municipality can step in and give relief to residents,” she said.

Campbell said there are also investigations with the police and EMPD into the protest fatalities. “They are busy with those. I had a touch base [meeting] with our chief of police and we are in communication.

“This is precisely why we have called this meeting to try to stop more lives being lost.”

Maile, having visited Molonyana's family, lashed out at the EMPD after hearing their version of events.

“The deceased was a welder who was working for himself. He was shot while [clad] in his working gear. The boots, the overalls, the gloves — meaning that he was not even part of the protest,” he said.

“He was [allegedly] shot by a white officer who has no shame, who boldly declared that he indeed shot him. The same guy, we are told, nearly ran over the mother of the deceased.”

Maile called for the police officer to be dealt with harshly if the allegations were true.

“We have asked that the Independent Police Investigative Directorate investigate speedily but we don’t want EMPD to wait for Ipid.”

Ipid sent officers to Thembisa on Monday to gather information.