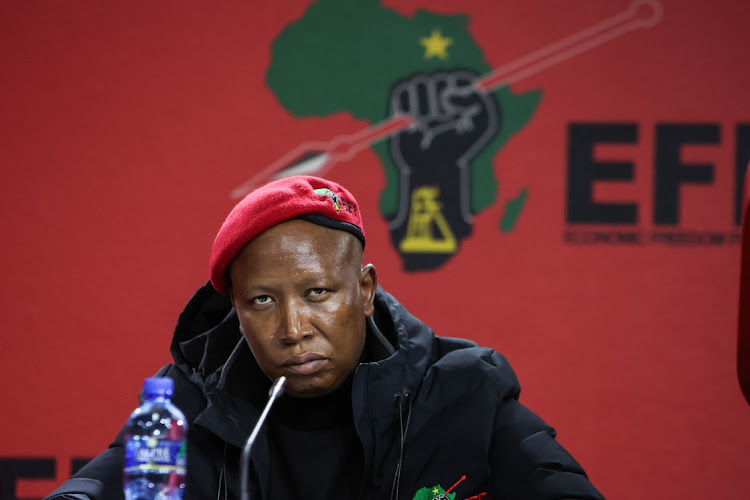 EFF leader Julius Malema says the party will embark on a national shutdown in an effort to remove President Cyril Ramaphosa from office.

Malema told reporters on Thursday that Ramaphosa and his administration had failed the people of SA with high unemployment, lawlessness and lack of accountability.

He said the EFF would also demand immediate action on the serious economic and social problems that the  country is facing.

Malema said SA has faced extremely high levels of crime, which the police had failed to crack and arrest the perpetrators.

“It is almost two months since the murder of Hillary Gardee, the police have not provided a solid and formidable case as to what happened ... [and] for what purpose. Young children died in a tavern in East London, there is still no sound reason to what exactly happened.

“Fifteen people were massacred with automatic rifles in Soweto a week ago and police have not provided a sound explanation as to what exactly happened. All this shows that we are slowly degenerating into a lawless state, a banana republic where criminals can do as they please without any consequences. Our people are not safe and the government is nowhere to protect them,” Malema said.

He said the EFF has written to the SA Reserve Bank, Financial Intelligence Centre and SA Revenue Service to act on the allegations of money laundering against Ramaphosa relating to millions of rand stolen from his Phala Phala farm in Limpopo.

Malema said they were yet to get responses.

“The EFF will also form part of all the progressive formations of SA to embark on a national shutdown which will  seek to remove Ramaphosa from office. The nature of the shutdown which the EFF will partake in will not be candle-holding and white-flag type of a shutdown.

“It will be a shutdown that must communicate to the sitting government that enough is enough. We cannot fold our arms and do nothing when our country is being sold to the dogs,” Malema said.

He said the party, together with other organisations, will make the following demands:

The EFF is also planning to approach the court in order to compel Ramaphosa to answer on the  farm scandal.

Last month, former spy boss Arthur Fraser laid charges of money laundering, kidnapping and defeating the ends of justice against Ramaphosa relating to wads of cash in foreign currency that was stolen at the farm.

Opposition parties, including the DA, have been calling for Ramaphosa to explain himself.

Ramaphosa must toughen up

Something that is going to sink President Cyril Ramaphosa is indecisiveness.
Opinion
4 weeks ago

Advocate Dali Mpofu, for suspended public protector Busisiwe Mkhwebane, says they will call President Cyril Ramaphosa to testify at the impeachment ...
News
3 weeks ago
Next Article