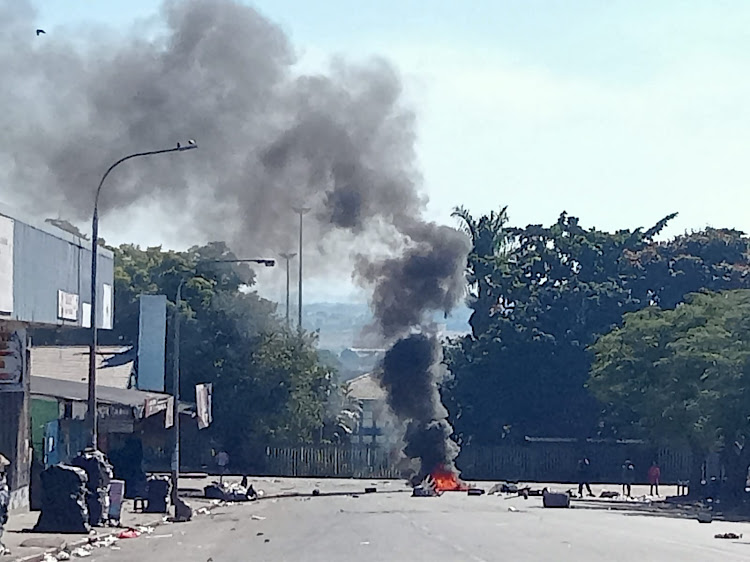 Major routes in and out of several areas in Mpumalanga into the Mbombela CBD have been blocked.
Image: Mandla Khoza

Major routes in and out of several areas in Mpumalanga into the Mbombela CBD have been blocked by taxi drivers in protest against the rising cost of fuel.

In some instances, truck drivers were forced out of their vehicles which were then used to block roads on Wednesday.

Provincial police had their hands full as they moved from one area to the next to try and calm the situation which left some passengers stranded and motorists unable to pass through.

Most businesses could not open on Wednesday as people were not able to get to work.

Blocked roads include Kaapschehoop, the N4 from Matsulu and Malalane, the R40 from Barberton and Lydenburg, KaBokweni and small roads in the Mbombela CBD.

“For now the Nelspruit CBD seems calm but we are moving to other areas, KaNyamazane, Emkhatsini and more. We have arrested eight suspects on charges of public disturbance and public violence, they are being processed as we speak,” said Mohlala.

A truck blocks access to the Mbombela CBD during a protest over the rising fuel price.
Image: Mandla Khoza

Topstar taxi association chairperson Johan Mavundla said they were struggling, saying if the price of petrol does not go down, the industry will collapse.

“This is hard for us, remember last week we were talking about fare price increments which we haven't done yet and now the petrol price goes up with more than R2.

“At some point as the management we are able to talk our people to calm down but this time they didn't want to hear a word from us. Instead they recruited other associations and took to the streets as you can see.

“We have no choice but to rally behind them because we know this will collapse our business. Taxi drives for the whole day; we are the most petrol buyers as we ferry passengers so this is hitting us hard,” said Mavundla.

Scelo Mokoena from Ngodini said: “Our government doesn't care about us, they know the the high unemployment rate of this country and they keep on increasing the petrol price which will hit us hard as the unemployed because that will mean food prices are increasing too. As we speak we can't afford food the way it's so expensive but instead of coming with a remedy for that they increase more. These people in government don't know the life we are living because they are fed from our tax, they don't buy food. That is why we decided to join the taxi drivers and we are saying an injury to one is an injury to all.”

Taxi commuters will be hit with hefty increases of up to R5, the highest in history as fuel prices and the cost of living continue to spiral.
News
1 month ago

As taxi fares are set to increase yet again after the recent fuel cost increase, Sowetan visited Bara and Bree taxi ranks in Johannesburg to assess ...
News
1 month ago
Next Article