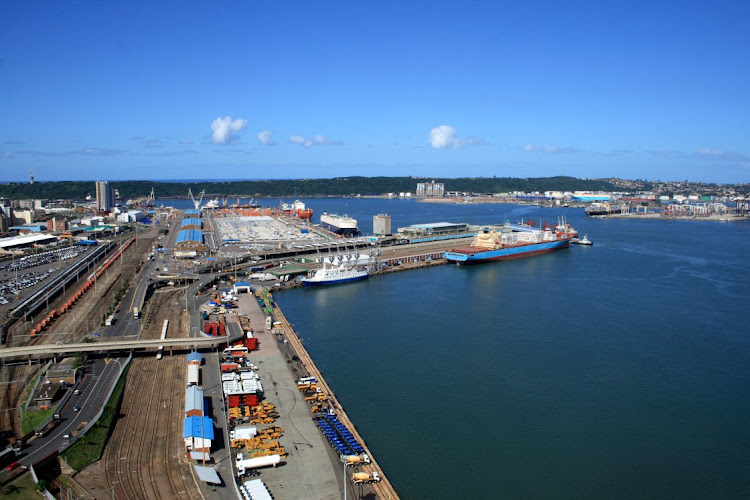 Transnet has invited owners of small businesses to take part in the multibillion-rand projects it is embarking on at all of the country's major ports.
Image: File

Transnet has urged small businesses to take advantage of the projected R4.8bn it will use to expand Durban's port in the next three years.

That was communicated to small business owners by the Transnet National Ports Authority (TNPA) in an engagement session in Durban on Thursday. The authority has been running sessions for SMEs to solidify their partnerships with small business owners and teach them about the opportunities that are open to them in all eight Transnet commercial ports in the country.

The Free State High Court on Friday postponed the R24.9m Nulane Investment fraud and money laundering case until September 8 for another case ...
News
1 month ago

“We were tired of always telling people that certain services can only be done at the head office, so we decided to give ports enough powers to run the day-to-day operations and meet the immediate needs of the business. We will then bring head offices close to these regions,” he said.

He said the head offices will support the ports and strengthen the relationship with the provincial governments.

Motlohi detailed the impact of some of the major setbacks that they have experienced in the past few years, including Covid-19, the riots, the cyber attacks at the ports and the recent floods in the province.

“As we are trying to move, we get something that affects our plans, disrupting our activities and hitting our finances.”

“Two and a half years ago we could not spend the money we had hoped to, so jobs that we could have accrued and opportunities for SMMEs died.”

He said they have engaged with customers, business chambers, government officials and political analysts to find ways of making a meaningful change in the environment — hence the need to cement the relationship with small businesses.

He said there will be a lot of opportunities for SMMEs to partner Transnet, both now and in the near future.

“We’re the biggest region so it is important that we get it right here, with R100bn  expected to be spent in the region in the next 15 years or so. Not all of it will come from us, some it will come from people who will find KZN investable.

Here's how to receive funding from Sefa

Small, micro and medium enterprises (SMMEs) in various sectors are flourishing, thanks to the assistance they receive from the Small Enterprise ...
SebenzaLIVE
5 months ago

Siyabonga Ndwandwe, acting executive manager for the project delivery unit said TNPA understands the challenges and the national agenda to combat them and is prepared to drive it.

“Localisation of procurement growth goes hand in hand with that. The government intends to respond on various platforms, such as SMME development, BBBEE, competitive supplier programmes ... So we get the historical issues and there’s a framework of how we need to address them,” he said.

“There is ‘black industrialisation’ that is really aimed at unlocking access to finance and markets that are tapped and untapped. We’re hoping to open people’s minds to other things that are available within project delivery that we can upskill ourselves with, aside from pouring concrete and laying bricks.”

Outlining what is in the investment pipeline for the region in the next three years, Ndwandwe encouraged SMMEs to “find the lanes that fit their services and find a way in”.

“Richards Bay is looking at an investment proposal of about R590m  in the next three years. At Port of Durban, it’s R4.3bn. Hopefully, when we break these numbers down you will see where you fit in.”

There are 66 projects in the pipeline — 39 of which are earmarked for Durban. Thirty-five  have not yet started, including 15 that are still in concept stage.

Mzonyana Sidinana, acting executive manager for supply chain, outlined the processes to follow to get a tender with Transnet.

He said there are pre-qualification requirements to qualify for a tender at Transnet: BBBEE level, subcontracting and need for local content.

Though the requirements were declared invalid by the Constitutional Court in February, Sidinana said they were given 12 months to come up with a “better conditions” so they are in effect until February next year.

He said the Transnet constitution calls for a fair and equitable procurement process among suppliers.

“I heard about an ‘evergreen’ contractor who always gets business. Through this restructuring of the organisation we will ensure that we have SME development that makes sure that no service provider is ‘evergreen’ or keeps getting contracts. The process must rotate,” he said.

Motlohi said it was imperative that people, especially from port cities,  became familiar with ports — “the elementary parts of the maritime language”. He proposed that primary school pupils should visit ports and learn the basics.

“Everyone in the port cities must know at least some maritime language. The biggest thing we have in Durban is the ocean but people don’t know even the elementary parts of the language,” he said. “This will help them connect with international investors because from a language perspective we can do better. Relationships precede business because you can’t do business with a person you don’t trust.”

The SA Communist Party (SACP) has called on President Cyril Ramaphosa to re-examine his assertion that the state does not create employment.
News
6 months ago

President Cyril Ramaphosa has lauded progress made by Operation Vulindlela in critical sectors of the economy, including electricity, water, ...
News
3 months ago

Finance minister Enoch Godongwana on Thursday delivered the medium-term budget policy statement, with a focus on growing the country's economy.
News
9 months ago
Next Article