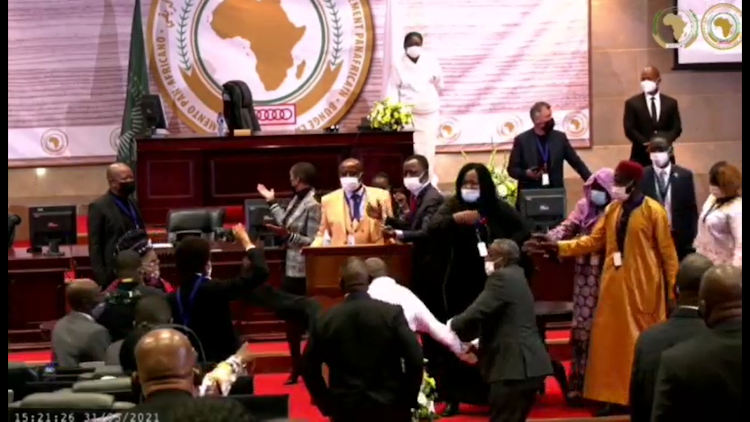 A member of the Pan-African Parliament kicks out at ANC chief whip Pemmy Majodina during scuffles over the election of the parliament's new leadership in May 2021.
Image: Screengrab

PAP insiders have revealed that Charumbira was the sole candidate for the position when nominations closed on Tuesday.

TimesLIVE has established that Malawian MP Yeremiah Chihana, who had also thrown his name in the hat, withdrew from the race after the Southern African Development Community (Sadc) caucus officially nominated Charumbira as the region’s presidential candidate.

Chihana had not responded to request for comment at the time of publishing.

If elected, Charumbira will become the first PAP president from the Sadc region.

In his opening remarks on Tuesday, AU Commission chair Moussa Faki Mahamat pleaded with delegates to give the southern and north African regions a chance to lead the institution. The two regions are the only ones of the AU’s five regions that had not held a PAP presidency since its inception in 2004.

Mahamat, who is expected to preside over the elections, confirmed the principle of rotation has not yet been ratified and cannot be enforceable at this week’s gathering.

“I want to be clear and sincere with you all. It is regrettable the protocol establishing rotation has not entered into force because of a lack of the required number of ratifications. From the legal point of view it is obviously not effective,” he said.

PAP is scheduled to elect its new president and four vice-presidents on Wednesday.

Meanwhile, ANC chief whip Pemmy Majodina, who is also a PAP MP, has been elected as interim chairperson of PAP’s southern region’s caucus.

Majodina is tasked with leading the southern caucus until the new bureau and other organs of PAP are elected later in the week.

Majodina is running for the three-year chairmanship of the southern caucus. If elected, she will be the first South African to hold the position.

Give rotation a chance, AU chief pleads with Pan-African Parliament ahead of elections

AU Commission chair Moussa Faki Mahamat has pleaded with Pan-African Parliament delegates to give the southern and north African regions a chance to ...
News
1 month ago

The Pan African Parliament could descend into chaos again when it sits to elect new leadership this week.
News
1 month ago

'There's an honourable member who's officially announced that he's going to assassinate his colleague after we leave this chamber,' an MP said.
News
1 year ago
Next Article