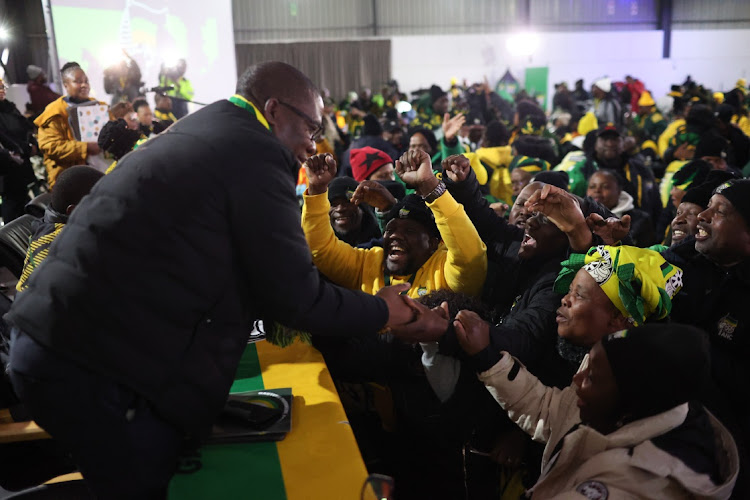 Members of the ANC congratulate Panyaza Lesufi after his election as provincial chairperson of the ANC in Gauteng, 27 June 2022, at the Lakes Hotel in Benoni, during the ANC Gauteng elective conference.
Image: Alaister Russell

For the first time in the history of the ANC there are three women in leadership positions. The  women were elected  into the ANC Gauteng provincial executive committee's top five over the weekend in Benoni, Ekurhuleni.

The conference also saw Panyaza Lesufi emerging as the new provincial chairperson of the ANC in the province. Nomantu Ralehoko was elected deputy chairperson, Tasneem Motara deputy secretary and, beating her opponent by one crucial vote, Morakane Mosupyoe was elected provincial treasurer.

The weekend's hotly contested and at times tumultuous conference saw Lesufi emerge as  provincial chairperson after beating his rival Lebogang Maile to the post.  Lesufi received 575 votes  of the 1,119 votes cast. Maile got 543 votes.

Monday was not the first time Lesufi beat Maile  in an election. In 2018  he defeated Maile for the deputy chair position when former Gauteng  chair David Makhura was elected.

This weekend's provincial conference was characterised by controversy and delays. Jabulani Sithole, an ANC member from Ekurhuleni attempted to interdict conference when he brought an urgent application to the Gauteng high court. The court dismissed the urgency of the matter  after the ANC defended its holding the conference .

Just before the election results were announced inside plenary, delegates complained of fatigue, lack of sleep and lack of accommodation provided by the party.

Chaotic scenes played out at the ANC’s Gauteng provincial conference over the weekend, and the party’s organisational report painted a grim picture ...
News
1 month ago

Outgoing ANC Gauteng chairperson David Makhura has told delegates at the 14 Gauteng provincial conference that the party was headed down a dangerous ...
News
1 month ago
Next Article