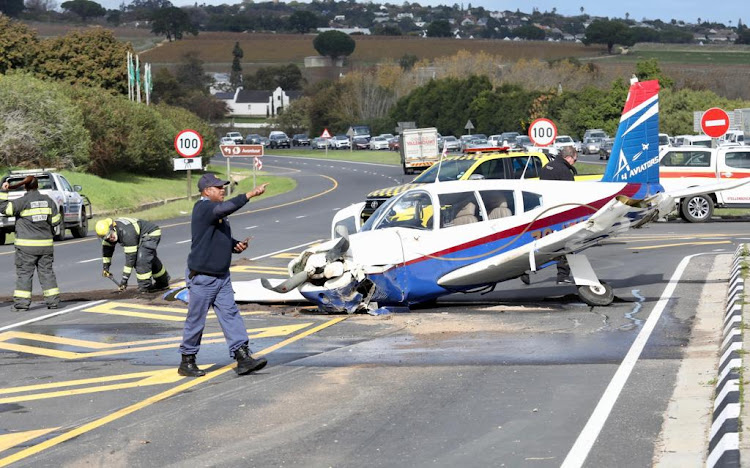 A light aircraft made an emergency landing on the R44, Stellenbosch, outside Cape Town on June 1.
Image: Esa Alexander

The light aircraft that landed in the middle of a road near Stellenbosch in the Western Cape recently developed engine problems during pilot training.

This was revealed in the SA Civil Aviation Authority’s preliminary report into the June 1 emergency landing released on Friday. The plane took off from Cape Town International Airport headed for the Stellenbosch aerodrome.

It developed engine problems midair and landed on the R44 road. The aircraft was destroyed in the accident, and both the flight instructor and student pilot were injured. According to the report, a preflight inspection was conducted on the aircraft and no anomalies were found. But the “engine spluttered” after the student practised landing.

“The instructor checked the engine indications and noticed a rise in fuel flow which was abnormal,” the report reads.

“The instructor then took over the control of the aircraft and commenced with the fault-finding procedure by recycling power and mixture levers, switching on the electric fuel pump, changing tanks and checking magnetos. There was no change in the aircraft’s engine performance, except when full power was applied, which caused the engine to splutter.

“The instructor decided to perform a forced landing but could not identify a suitable field as the aircraft was flying very low. He then assessed the R44 road ahead of him and committed to land on it as this was the only available area to land the aircraft. The traffic on the road made way for the aircraft except for one car that had stopped on the left lane.”

Plane lands in middle of road near Stellenbosch

A light aircraft made an emergency landing in the middle of the road near Stellenbosch on Wednesday.
News
2 months ago

While the instructor was trying to avoid the stationary car, the left wing hit a road sign pole. “The aircraft yawed to the left and immediately pitched down, causing the aircraft to land with the nose first.” It skidded for about 30m before it came to a stop.

“The left wing sustained damage on the leading edge, which was ripped off towards the end of the wing tip. Fuel was also leaking in the leading edge. The landing gear was found damaged,” the investigation found.

“The examination found that the engine and nose section were displaced upward and aft of the aircraft. The gascolator did not contain fuel as it was damaged during impact. The accident was considered survivable as no damage was caused to the cockpit and cabin structure of the aircraft.”

The preliminary report shows that the student pilot was compliant and the 51-year-old aircraft was airworthy.