'People made fun of him for running away so slowly': Inmate collared after sluggish escape bid 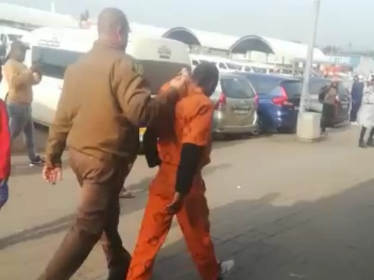 The inmate is apprehended by a correctional services official.
Image: Supplied

Residents of Kariega in the Eastern Cape shared a laugh after a prison inmate who tried to escape was quickly rearrested due to his lack of urgency in attempting to flee.

Videos of the man being escorted at the Kariega taxi rank by a correctional services officer have been shared widely on social media.

In the video the man can be seen held by the collar of his orange jumpsuit by a correctional service officer while onlookers joke and comment on how slowly he ran in his attempt to escape.

Other people can also be seen taking videos.

The inmate had been detained for 30 days after failing to appear in court on a charge of theft early in June.

On Wednesday afternoon, Nxumalo confirmed the man was already on the court premises when he escaped, but was unsure how he managed to flee.

“This was an attempted escape. He also had a further charge for theft, hence he had to appear in the Kariega court,” he said.

“But there was not much urgency in his escape. He was caught very shortly afterwards and people even made fun of him for running away so slowly.”

He said the man faced two counts of theft and another charge of attempting to escape from custody could be added after Wednesday’s incident.

A convicted murderer – out on parole and wanted in connection with the disappearance of a six-year-old girl – was previously set free after serving ...
News
1 month ago

The deadly cost of ineptitude

We are angry. Livid, in fact. Because our government’s incompetence or inefficiency is not victimless.
Opinion
1 month ago
Next Article