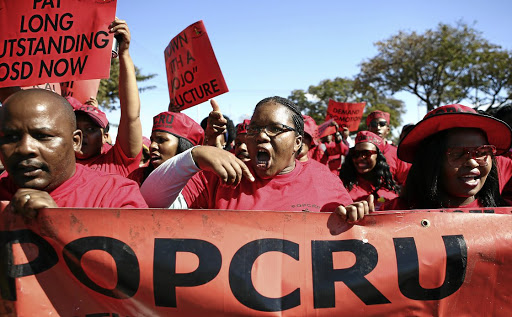 More than 100 members of the Police and Prisons Civil Rights Union protested outside the police headquarters in Pretoria on Wednesday over the nonpayment of trainee stipends since April.

Union spokesperson Richard Mamabolo said they have received complaints from police trainees across the country.

“We decided to act after getting horrible news about the trainees and it is not good that they are in a bad situation,” said Mamabolo.

Mamabolo said they want the stipends to be paid immediately and that the living conditions of the trainees be improved.

They also demanded that all trainees be put on the Polmed medical aid scheme immediately.

“We are tired of empty promises. We want our demands to be implemented or else there will be a time where there will be no police officers in the streets,” said the union’s general secretary Jeff Dladla.

He said the trainees get R4,500 stipends.

The union has vowed to intensify the protest and take to the streets every day next month if their demands are not met.

“The trainees are bathing with cold water since the beginning of winter and it is not right. They are not getting the right food they are eating at home.

“Our little brothers and sisters are suffering and people are getting paid millions every month and we are pleading with the SAPS to do the right thing and pay stipends to trainees,” Dladla said.

None of the trainees were present at the protest.

Police spokesperson Col Athlenda Mathe said it was aware of 73 of 10,000 trainees who have not received their stipends and this is due to a number of reasons, including that some of the unpaid trainees were working for other government departments.

“We are, however, engaging with the other departments to terminate their contracts to allow the system to pay the trainees,” said Mathe.

She said initially there were challenges with the training conditions at the Kimberley base camp but the SAPS, in collaboration with the SA National Defence Force, had attended to those matters and training was continuing as normal.

“The SAPS is committed to ensuring a conducive training environment for all our police trainees,” said Mathe.