Sace system does not put interests of the rights of children at heart, says advocate 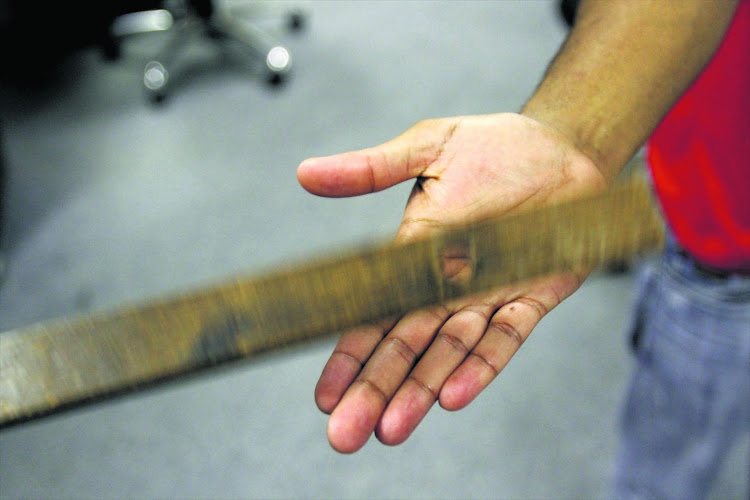 A new study says corporal punishment is still prevalent in schools more than 20 years after it was outlawed.
Image: Mark Andrews

The current system being used by the SA Council of Educators (Sace) to punish teachers who still met out corporal punishment does not put the interests of the rights of the children at heart.

This the argument made by Adv Chris McConnachie in the Pretoria high court where the Centre for Child Law, represented by Section 27, is challenging Sace in a bid to secure harsher sanctions for two primary school teachers who used corporal punishment in separate incidents in Gauteng and Limpopo.

McConnachie told the court that Sace has a system which uses a prescribed sentence for every offence that a teacher commits.

However, these prescribed sentences are not centred around the rights of the children.

“Whenever a child is assaulted, it impacts on the right to dignity, right to freedom of security of a person and in addition the rights of children provided for under Section 28 of the constitution. This include the right to be protected from mal-treatment, neglect and abuse.

“[During disciplinary hearing], there was no attempt to get any form of representation from either the children or their parents on how the assaults had impacted them,” said McConnachie.

In the first case, a seven-year-old boy had to be hospitalised after he was hit on the head with a pipe by his teacher in 2015.

In the second, a 10-year-old girl was left bleeding from her ears after she was slapped and beaten by her teacher in 2019.

The teachers involved received identical sanctions – fines of an effective R10,000 each, these included their removal from the roll of educators.

However, this was suspended for 10 years.

McConnachie said the current system used by Sace does not even take into account the charges that each individual faces.

In the first case, the teacher faced four charges – two charges of assault and two additional charges of threatening learners not to report the assault.

The other teacher was charged with a single assault of using her hand.

“But yet both teachers had an identical sanction imposed on them. There was no regard to the different nature of the assault,” McConnachie argued.

Law centre Section27 is set to challenge a decision by the SA Council for Educators (Sace) after two complaints of corporal punishment.
News
1 year ago

Six pupils at Siyamukela High School in Madadeni, Newcastle, were allegedly scalded this week when a teacher allegedly poured boiling water over them ...
News
1 year ago

Teacher fired for hitting pupils, insulting female colleague fails to get job back

A Gauteng teacher who was sacked for assaulting two pupils with a pipe, referring to them in derogatory terms, and swearing at a female colleague has ...
News
8 months ago

School in another assault allegation

A grade 11 pupil from the notorious Cefups Academy in Mbombela is recovering in hospital after she was allegedly beaten up by a manager who also used ...
News
8 months ago
Next Article