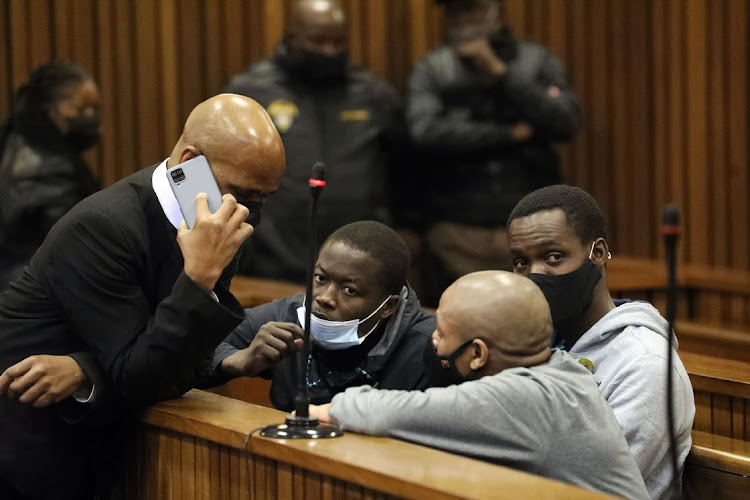 Adv Malesela Teffo has questioned whether the Pretoria high court has jurisdiction to hear the trial of five men accused of killing Bafana Bafana star Senzo Meyiwa, arguing that it does not.

After battling to get the court to listen to his submission the whole morning, Teffo addressed the court after lunch, questioning how it happened that the Meyiwa trial got to be before judge Tshifhiwa Maumela.

Teffo told the court that section 111 of the Criminal Procedure Act empowered the minister of justice Ronald Lamola to be the one who could direct court proceedings to be held outside the natural jurisdiction where the crime had taken place.

In the case before court, a letter was submitted in which the national director of public prosecutions Shamila Batohi gave a directive for the matter to be heard in the Pretoria high court instead of the high court sitting in the Palmridge magistrate’s court where the trial was initially set to take place, Teffo submitted.

“This court has no jurisdiction to entertain this case… She [Batohi] has the power to give the directive where the alleged offence can be investigated but not where the court proceedings are heard. That lies with the minister,” Teffo said.

“Adv [Malesela] Teffo, if you are not going to talk about the date, sit down.”
News
2 months ago

He also questioned how the letter from Batohi was signed on February 9 2020, on a Sunday, seven months before the five men accused of killing Meyiwa were arrested on October 27 2020.

“I don’t know if Adv Batohi is a practising gogo – a sangoma. She can predict nine months [in advance] that the matter will be here,” Teffo said.

Judge Tshifhiwa Maumela requested that Teffo submit a substantive motion where he raises these issues and allows other parties to respond.

Yesterday, the court was expected to give a date on which Adv Zandile Mshololo could come back to continue with the cross-examination of the state’s first witness Sgt Thabo Mosia after receiving the second docket on June 8.

That docket indicates that singer Kelly Khumalo  is the one who fired the shot that killed Meyiwa.

Mshololo read a written response from Adv Andrew Chauke, the director of public prosecutions South Gauteng, on this docket.

Chauke said the docket did not have any status but “was an internal opinion from a junior advocate, which was without merit”.

Earlier in the day, Maumela had to stamp his authority after several heated exchanges with Teffo.

Teffo asked to make a submission in relation to the documents that Mshololo had read in court, but Maumela said his timing was wrong as he was repeating what the court had already heard.

“You will be given an opportunity to address the court before the state responds. If I now jump without hearing fully what Adv Mshololo is saying, I can be confused as well,” Maumela said.

Maumela was angered even more as Teffo’s instructing attorney Tshepo Thobane stood up to address the court.

“You two, I don’t know what you are testing in me… what manner of demeanour is this? You allow your friend to drag this court out of its course, only later you say you want to help,” Maumela said.

Meyiwa was killed at his then girlfriend singer Kelly Khumalo’s home in Vosloorus on the East Rand.

The case was postponed to today to allow for the parties to secure a date on the court roll in which the new issues that have been raised by Teffo can be argued.

While it is common cause that any trial may have moments of tension between the parties, the level we have observed in this case, in particular ...
Opinion
2 months ago

The second docket which accuses singer Kelly Khumalo and those who were with her in the house where Senzo Meyiwa was killed was nothing but an ...
News
2 months ago

Government should include all official languages on the basis of provincial language demographics to ensure practicality.
News
2 months ago
Next Article