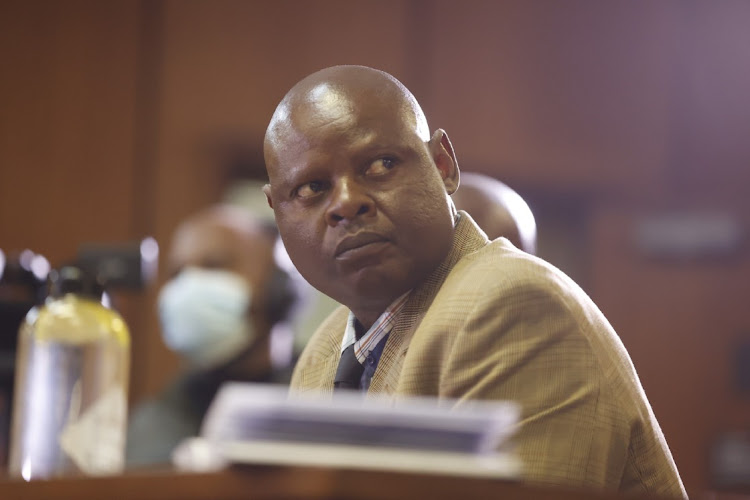 Sgt Thabo Mosia giving testimony during the Senzo Meyiwa trial at the High Court in Pretoria where 5 people are accused of killing the football star.
Image: Thulani Mbele

The state’s first witness Sgt Thabo Mosia spent the better part of his cross-examination on Tuesday agreeing with Adv Zandile Mshololo that the scene where soccer star Senzo Meyiwa was killed had been contaminated when he arrived.

Mshololo pointed out several pieces of evidence led before the court which backed the defence’s case that when Mosia arrived at singer Kelly Khumalo's house in Vosloorus, on the East Rand, 20 minutes after midnight, the scene had already been compromised.

The first piece of evidence was the statement from one of the witnesses who arrived on the scene before Mosia who said she saw a woman called Maggie Phiri wipe water from the floor.

In her statement, the woman also said there were cans of alcohol that Phiri removed, saying she did not want police to know that the people in the house had been drinking.

Mosia conceded that this meant the scene was “possibly” contaminated.

He also agreed with Mshololo that there was no investigation on the sobriety of the person who took Meyiwa from the scene to the hospital.

'Meyiwa murder scene was deliberately cleaned up before cops' arrival'

The scene where Senzo Meyiwa was gunned down was cleaned up before police arrived and cordoned it off.
News
2 weeks ago

Mosia struggled to explain why was there no blood on the kitchen floor where the alleged robbers had a tussle with one of the witnesses.

“It is surprising also to me, I cannot answer,” Mosia said.

Msholo then asked if there was a possibility that the reason there were no blood stains on the floor was due to the fact that they had been cleaned before Mosia’s arrival.

“That could be a possibility,” Mosia conceded.

Mosia was also questioned as to why there were no investigations on the person who removed Meyiwa from the crime scene to take him to the hospital.

Msholo asked why Mosia, after getting information that Meyiwa was rushed to the hospital, did not follow up on the information and look at the condition the Orlando Pirates goalkeeper was in.

“I already testified that I had to wait for Gauteng crime scene management to arrive so that we can all continue with investigations on the scene and divide responsibility and follow up on the person who was shot in hospital,” Mosia said.

Mshololo argued that even the bullet projectile that Mosia found on the kitchen cabinet was a leftover after the scene had been cleaned.

“The bullet projectile was recovered after the crime scene had been contaminated?” Mshololo asked.

To which Mosia replied, “It is so”.

Mshololo told the court that ballistic reports which will come before the court link the men accused of killing Meyiwa through that bullet projectile.

Over the past days, the defence has been trying to prove to the court that Mosia made several blunders in handling the crime scene when he arrived. The defence has also argued that evidence was planted on the scene which was already contaminated by the time Mosia arrived.

The first adjournment on Tuesday was longer than the usual 15 minutes as judge Tshifhiwa Maumela said he was not feeling well.

The application brought by Adv Malesela Teffo to have a trial within a trial in the murder case of Orlando Pirates goalkeeper Senzo Meyiwa has been ...
News
2 weeks ago

A state forensic witness in the Senzo Meyiwa murder trial was questioned on Friday about why he did not do gunshot residue tests on the hands of ...
News
3 weeks ago

The advocate defending four of the accused in the Senzo Meyiwa murder trial says he will bring a formal application for a trial within a trial after ...
News
3 weeks ago

An instructing attorney for four accused in the Senzo Meyiwa trial said on Thursday they will be reporting Kelly Khumalo's lawyer to the Legal ...
News
3 weeks ago
Next Article