'Racism still a feature of everyday life in SA': Ramaphosa speaks out on Stellenbosch saga 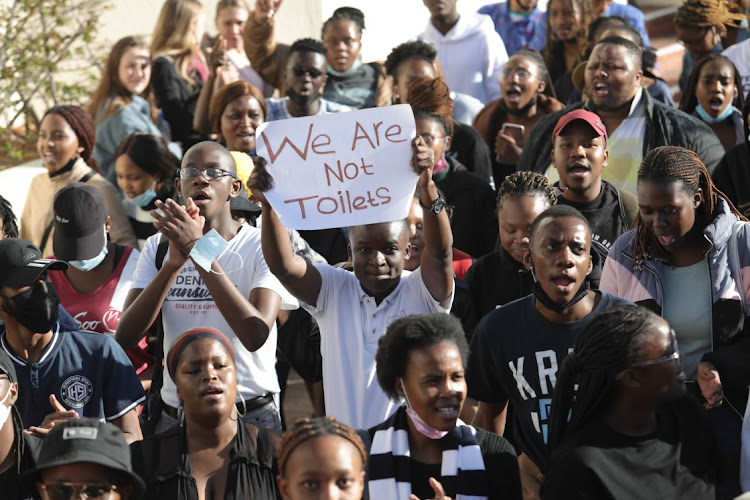 Stellenbosch University students marched to demand the expulsion of a student who urinated on a fellow student's laptop and belongings. File photo.
Image: Esa Alexander

President Cyril Ramaphosa says a racist incident at a Stellenbosch University residence must be used to confront racial inequality which continues to haunt the country 28 years into democracy.

The incident in which white student Theuns du Toit entered the room of black student  Babalo Ndwayana and urinated on his laptop and other belongings caused outrage countrywide, with Ramaphosa describing it as a degrading, humiliating and despicable act.

“We have come too far and the sacrifices made have been too great for such appalling acts of racism to turn us against each other. Rather, we must use this incident to confront the issue of race and racial inequality in our society.”

It was unfortunate that such acts still occurred in a country with a bitter past which many fought hard to overcome, he said. It was even more disturbing that such incidents were taking place at schools and places of higher learning, committed by people born after the end of apartheid.

The Stellenbosch incident is not an isolated one, he said. “The truth is that racism is still a feature of everyday life in SA. The sooner we recognise that reality, the sooner we can change it.”

Ramaphosa lauded thousands of young South Africans for holding protests against what he called a deep and pervasive problem in society. He quoted a fourth-year student leader at the institution, Kwenzokuhle Khumalo, as saying, “You’ve met the wrong generation this time.”

Ramaphosa said like the youth of 1976, a new generation of young South Africans was stepping forward to proclaim their birthright and reclaim their future.

“They are challenging society to grapple with racism, its causes and its effects. As Ms Khumalo rightly said, it is not black people who are the problem and need attention, but those people who still hold on to ideas of white superiority.

“It cannot be that the onus must rest with the formerly oppressed as the main victims of racism to advance reconciliation. It cannot be that black South Africans have to continue to prove themselves worthy of dignity and respect.”

Referring to a 2016 judgment in a case involving a SA Revenue Service employee who was fired for using the k-word at work, Ramaphosa quoted former chief justice Mogoeng Mogoeng as saying, “there are many bridges yet to be crossed in our journey from crude and legalised racism to a new order where social cohesion, equality and the effortless observance of the right to dignity is a practical reality”.

Ending racism is not just about changing attitudes, it is also about changing the material conditions that still today separate black and white South Africans

If SA is to cross the bridges, there needs to be an understanding of what is causing racist attitudes to flourish in schools and institutions of higher learning, added Ramaphosa.

“We need to understand what kind of institutional cultures contribute to racism in the workplace, in social organisations and in communities.

“We need frank and honest dialogue between people of different races on the experiences of black people in SA 28 years into democracy. These discussions should be part of the life orientation curriculum in our schools.

“The arts and culture community should produce content and programming that fully reflects the diversity of the country and the lived experiences of people of all races.

“Ending racism is not just about changing attitudes, it is also about changing the material conditions that still today separate black and white South Africans.”

Farmer stole our land and now we live in a zoo, tearful woman tells Ramaphosa

When Nqobile Motsweni woke up on Friday, she told herself this would be her last chance to tell President Cyril Ramaphosa about her family's ordeal ...
News
2 months ago

President Cyril Ramaphosa on Friday said he remained hopeful power utility Eskom would do everything it could to avoid stage 8 load-shedding.
News
2 months ago
Next Article