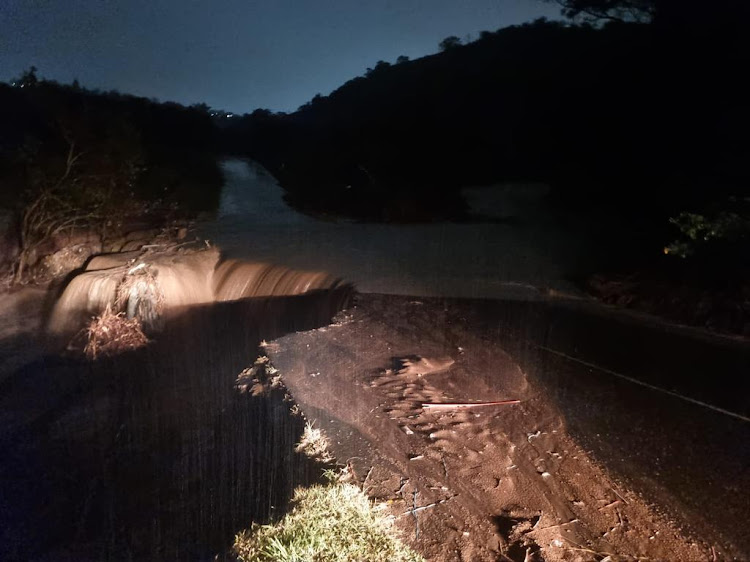 The bridge in Stockville Road in Westmead had been washed away by the heavy rains lashing KwaZulu-Natal.
Image: KZNTraffic via Twitter

At least 190 elderly residents in Tongaat, KwaZulu-Natal, had to be evacuated from their homes on Saturday night due to localised flooding as heavy rains continue in the province.

According to the spokesperson for the KwaZulu-Natal emergency and medical services, Robert McKenzie, there have been no injuries reported.

He said emergency services remained on high alert as heavy rains continue in the province, especially in the eThekwini district. He also said some roads are affected by localised flooding, and warned residents to avoid driving or crossing affected roads.

“We urge the public to be extremely cautious and avoid crossing waterlogged or any flooded area, as the water is powerful and can wash you away. Even small streams can wash you away — you lose your footing and get swept away in the water,” he said.

McKenzie said they are still able to access all the areas and health facilities through alternative routes. .

He urged residents to stay in contact with their local councillors for advice and updates.

Meanwhile, KwaZulu-Natal premier Sihle Zikalala has sent a message to the people in his province as the storm intensifies.

He said the province was experiencing torrential rains and some areas were already in danger of flooding.

“We wish to sound warnings to all our communities especially in the southern part of Durban, the Durban basin which includes areas such as uMlazi, Wentworth, Isipingo, Amanzimtoti, Westbrook, as well as areas in the northern parts including uMdloti, Tongaat.

“We are evacuating people from Othongathi Water ways with the help of the SANDF.

“We urge communities living near river banks to monitor the rivers and evacuate immediately if they notice the river rising,” Zikalala said.

He urged anyone in risk zones to evacuate.

“We make a call to all our councillors to be on the ground and to feed information on any areas that need emergency response.”

He said they were monitoring the situation on the M7 and advised people to delay travelling by road.

“All disaster teams are on the ground. Fortunately the SANDF is here and will be able to assist us. Road closures have been effected and we are urging citizens to take heed and make sure you are safe.”