Tempers flare as pupils and security face off outside Durban school 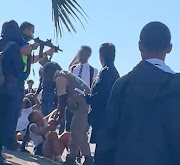 Image: Screenshot A screenshot from a video clip online shows an alleged security officer pointing a firearm in the face of a school pupil outside Effingham Secondary School in Durban. According to an eyewitness, the pupil had threatened to kill the man.

What began as an altercation between two schoolgirls at Effingham Secondary School in Durban soon erupted into chaos as private security officers and police faced off with dozens of pupils on Thursday.

The incident was captured in a series of video clips shared on social media, some of which have since gone viral, depicting a heated stand-off between pupils and security officers.

In one of the videos, a man points a high-calibre firearm in the face of a schoolboy.

However, according to an eyewitness who preferred to remain anonymous, the video does not tell the full story.

“The video does not show what was actually happening. There were mobs of learners who were on the road antagonising those who were there to calm the situation. The video does not show how the learner threatened to kill the man if he did not let go of the female learner who had been causing problems. The learner reached into his pocket and in that split-second the man thought he had a knife on him.”

KwaZulu-Natal education spokesperson Muzi Mahlambi told TimesLIVE the situation started with an altercation between two schoolgirls which teachers were unable to contain.

“Two girls were involved in [an] altercation and when they were trying to restrain it, [it] became difficult to calm down the situation. The fight went on and on. Security guards who were passing by attempted to assist and were soon met with force by unruly learners from the school and learners from other schools. Police had to be called in,” he said.

Mahlambi said the situation was worsened by parents who came to the school.

“Parents came to attack other learners who were fighting with their children. That became chaotic and out of hand.

“Department officials were helpless, because under normal circumstances, when learners are displaying unruly behaviour, we always have comfort in calling in their parents, but when parents come and display the same behaviour you find yourself in a hopeless situation.”

He said due to what occurred on Thursday, the department had decided to close the school until Monday.

“A meeting will be held on Sunday involving parents and the department. We hope that after this meeting school can resume on Monday.”

He said the pupils involved in the fight which started the chaos would be dealt with by the school in an appropriate manner.

Police referred all queries to the department of education.