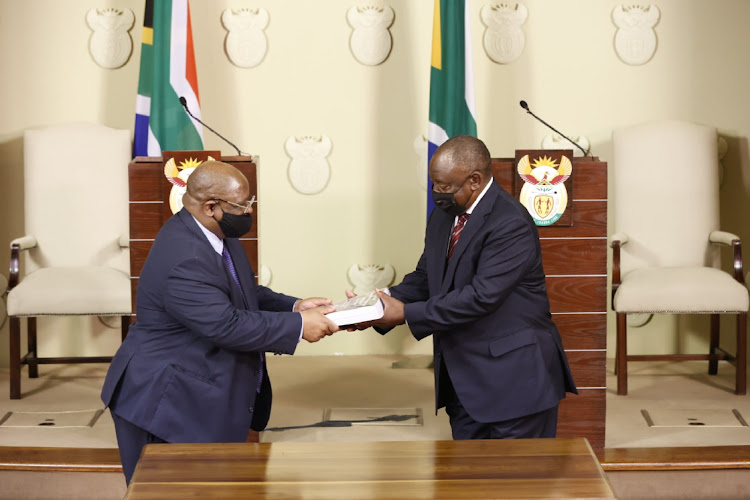 Chief justice Raymond Zondo hands over a copy of his report on state capture to President Cyril Ramaphosa. Parliament has clarified it expects Ramaphosa to submit the report's implementation plan four months from June 15, which is October 15.
Image: Thulani Mbele

Parliament announced on Wednesday that it expects President Cyril Ramaphosa to submit all outstanding state capture reports, along with the implementation plan, “four months after June 15”. That makes it October 15.

Parliament said it had said in two media statements that the president would submit all outstanding reports, along with the implementation plan, on or before August 31.

“This was erroneously based on the previous extension, which has now been cancelled by the most recent extension, whose high court order of 28 April 2022 requires the judicial commission to complete its work by 15 June 2022.

“Since the chairperson of the commission's recent extension was granted until 15 June for submission of the final report, the president's submission is now due to parliament four months after receipt on that date, not the end of August as incorrectly communicated in the last two releases,” parliament spokesperson Moloto Mothapo said.

DA deputy chief whip Siviwe Gwarube said this is an important step for transparency and accountability.
News
2 months ago

Parliament’s legal services say there is nothing stopping MPs from processing the state capture commission reports, especially the sections ...
News
2 months ago
Next Article