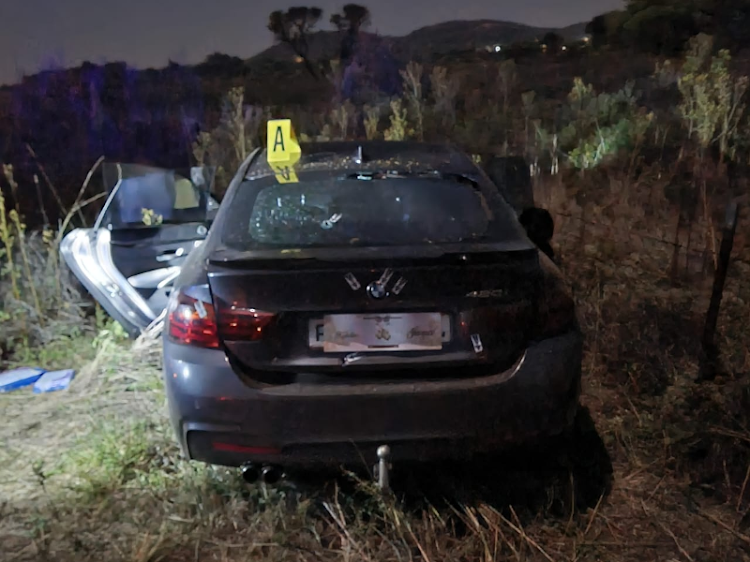 The victim was injured during the shoot-out and was taken to hospital.
Image: Supplied

Police in Polokwane arrested two suspects and rescued a regional bank manager allegedly abducted while jogging at the weekend and held for ransom.

Brig Motlafela Mojapelo said the 56-year-old went on a jog at about 9am on Saturday when he was abducted not far from his home in Welgelegen on the outskirts of the city.

Mojapelo said the abductors contacted the victim's relatives and demanded a substantial sum of money in return for his safe release.

“The matter was reported to the police and detectives from the provincial investigation unit, crime intelligence and organised crime unit, tactical response team joined by hostage negotiators started investigations and gathered all the information in a bid to rescue the victim.

“The ransom money was dropped off at the agreed pick-up point. The suspects came, driving in two BMW motor vehicles, white and black in colour, and fled after picking up the money with the victim still inside one of their vehicles.”

Mojapelo said a high-speed car chase ensued and the driver of one of the BMWs, carrying the abducted victim, lost control, swerved into bushes and came to a halt.

“Two suspects were arrested after they apparently were shot. The others managed to flee in the white BMW sedan. The victim was injured during the shoot-out and was taken to the hospital, where he is in a stable condition. The money was recovered and the other BMW confiscated.”

The two suspects, aged 25 and 28, who were in hospital under police guard, will appear in the Polokwane magistrate's court on Monday on charges of abduction, extortion and attempted murder.

Provincial police commissioner Lt-Gen Thembi Hadebe lauded the team for a well-co-ordinated operation that led to the rescue of the victim and arrests.

“We appeal to members of the community to come forward with any information that can assist in the apprehension of the remaining suspects,” she said.

Four suspects who allegedly kidnapped a Cape Town man and demanded a ransom from his family have been arrested by Western Cape police. The victim was ...
News
3 months ago

The department of correctional services on Tuesday said a prisoner had been abducted by two armed gunmen in Thembisa, Gauteng.
News
4 months ago

Gang-rape victim gets justice after 12 years

The successful lawsuit against police minister Bheki Cele over his officers’ negligence in stopping and investigating the rape of a business person ...
News
4 months ago

A Durban schoolgirl who was whisked away in a car outside her school on Monday afternoon, in what was believed to be an abduction, is safe and sound.
News
6 months ago
Next Article