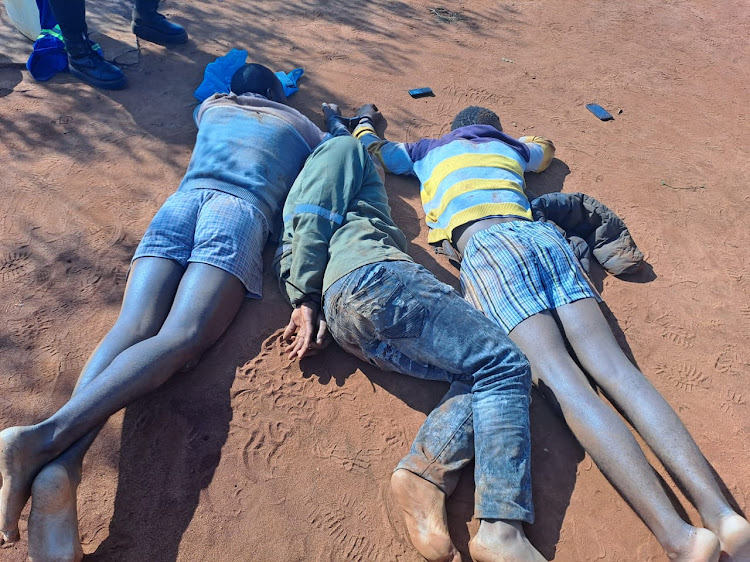 Three of the five people who were arrested after an ATM was bombed and cash taken from it in Carousel View on Friday morning.
Image: SAPS

Police arrested five suspects a few hours after an ATM was bombed in Carousel View in Tshwane on Friday.

At about 1.30am, police were notified about an ATM that had just been bombed and a fuel station that had been robbed in Carousel View.

“As the police were approaching, suspects started firing shots and a shoot-out ensued.”

Masondo said  four suspects were arrested at the safe house while other suspects fled on foot.

Police chased the fleeing suspects and arrested one of them and also recovered a firearm.

Masondo said explosives and stained cash, suspected to have been taken from the bombed ATM, were recovered at a safe house.

Gauteng police commissioner Lt-Gen Elias Mawela praised the members who responded swiftly in the early hours of the morning and arrested the suspects.

“This is a breakthrough for us as we had a number of ATM bombings in the past three months, especially in Tshwane district.

“We believe these are the suspects responsible. Profiling will be conducted to link them to other ATM bombings,” Mawela said.

eThekwini mayor Mxolisi Kaunda has accused criminal syndicates of having used the anger over the incarceration of former president Jacob Zuma to ...
News
2 months ago

Heavily armed robbers bombed four ATMs and two walk-in safes, making off with undisclosed amounts of cash in the early hours of Friday in Thokoza on ...
News
5 months ago

Police were involved in a shootout with a gang of men who allegedly bombed three ATMs at a Limpopo shopping complex on Friday.
News
7 months ago
Next Article